In our virtual tour across the intangible cultural heritage, after the story of the experience of  South China Research Center of the Hong Kong University of Science and Technology, we get to discover  the Patrimoine Culturel Immatériel of France promoted by a number of partners such as the Ministry of Culture and Communication, the French, Belgian and German-speaking Commissions for UNESCO, the France Télévisions and various local partners.

The project collected 114 films and more than 300 testimonials.

The web platform is very simple. On the right we find a list of contents related to the intangible heritage of French culture: horse riding, gastronomy, hunting, masters perfume-makers etc..
It is enough to click on the title to find a series of information such as texts, videos, photographs, paintings, maps and many interviews.
To better understand the importance of this digital archive we consult some topics of interest. 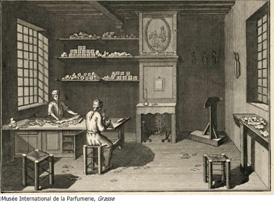 The perfumeurs of Grasse, for example, tell the importance of tradition through a short interview in which they testify how the tradition passes from one generation to the other and also in the school of perfumery the students are taught the techniques handed down from hundreds of years.

From the middle of the sixteenth century, the manufacture of alcoholic perfumes became important and the increasing use of perfume led to a great demand for aromatic materials. Montpellier and Grasse were the two major centres of perfumery. Montpellier, famous for its medical school and pharmaceutical school, cannot produce the plant substances needed for perfumery, given its harsh climate. Grasse, capital of eastern Provence, benefits from an exceptional microclimate and a considerable livestock, very useful to the tannery, activity in which the city specializes since the fourteenth century.

of the development of perfumery can be traced back to the fashion of perfumed leathers: in the middle of the 17th century.We discover that the technique of the enfleurage is  the oldest and most expensive extraction process of flowers and that today it has been almost completely abandoned due to the high cost while the distillation is the extraction process that involves heating a mixture of water and aromatic plants in a still. The water vapour is then cooled and collected at the outlet of the apparatus in a container where, by decantation, the water separates from the odorous elements that it had generated and which are called gasoline.

Let me see the section “ Les maîtres tapissiers d’Aubusson”, the upholsterers of Aubusson. 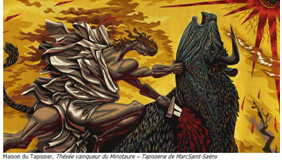 In this small city in the Department of Creuse the craftsmanship of tapestry is a centuries-old tradition.  The tapestry of Aubusson is based on an image of any artistic style, prepared on cardboard by a paperboard painter from the model provided by a designer.Weaving is carried out manually by a smoother on a loom placed horizontally, on the back of the tapestry, from hand-dyed wools on site. This demanding process involves considerable time and cost. 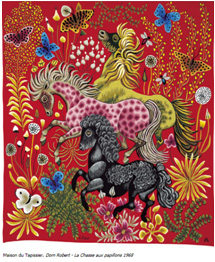 I also found very interesting The culture of the  lavender in Baronnies, finding that between the 1920s and 1930s, lavender cultivation reached its peak. Traditional over-exploited and unproductive bayonets are gradually being abandoned while the plantations are multiplying. Limited to bad land, they are associated with food crops, dishes such Soupe de fraise à la lavande and livestock. Thus Lavender takes its place in the family economy. 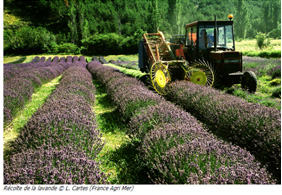 It is interesting to deepen the subject of distillation, which is millenary, as well as to follow the evolution from the point of view of technology as well as the history of the Baronnies.