9 December: International Day for the Commemoration and Dignity of Victims of Genocide

The Genocide Archive of Rwanda website, an example to prevent such events from recurring

Today, the 9th December, is the International Day for the Commemoration and Dignity of Victims of Genocide and the Prevention of This Crime, established in September 2015 by the United Nations General Assembly.

Unfortunately the twentieth century offers too many examples of genocide, the ones of Armenians, Jews, Tutsis, Bosnians, etc.

These events cannot fall into oblivion: historians and researchers collect documents, photographs, testimonies to be known by present and future generations and thanks to these documents humanity learns the meaning of the word “genocide”.

On the web there are several digitized archives that deal with the genocides of the twentieth century. To celebrate the day of 9 December, I chose the Genocide Archive of Rwanda website.

“Welcome to the Genocide Archive of Rwanda website. Here you will find our digital collection of items related to the 1994 Genocide against the Tutsi in Rwanda, pre-genocide history and post-genocide reconstruction processes”.

It seems incredible to receive a “Welcome” on a website archive in which, certainly, are collected dramatic documents of human history of the twentieth century.

In 1994 I was not born yet. And for young people the genocides of the 20th century are written in school books.

Promoting the study of these crimes against humanity means strengthening our determination to prevent such events from recurring.

To explore historical facts through the use of the Internet and the consultation of documents already digitized, is a great opportunity for knowledge.

Similar to the goal set by the UN when the International Day for the Commemoration and Dignity of Victims of Genocide was established (to raise awareness about the Convention on Genocide and its task to fight and prevent the crime of genocide), the Genocide Archive of Rwanda was established to prevent mass atrocity and genocide through education.

Image of the section regarding the Collections we can find in the archive; https://genocidearchiverwanda.org.rw/index.php?title=COLLECTIONS

Let me briefly explain why my choice fell on this archive. First of all, because it is one of the genocides that is hardly mentioned. Secondly, because the staff members is made up of young researchers who present their work with a lot of passion in a video that is located on the home page of the site. As a last reason, because the site has a user-friendly interface.

The layout of the site is very simple and the researcher moves easily between the different sections, represented by a photograph, a title and a short description.

We can start from the testimonies, then consult an interactive map of the places of genocide, or we address the issue of post-genocidal reconstruction.

The testimonies collected after the genocide against the Tutsi, under the leadership of Theodore Sindikubwabo, were analog data and to make them accessible online they were converted to digital data, through a digitisation process. 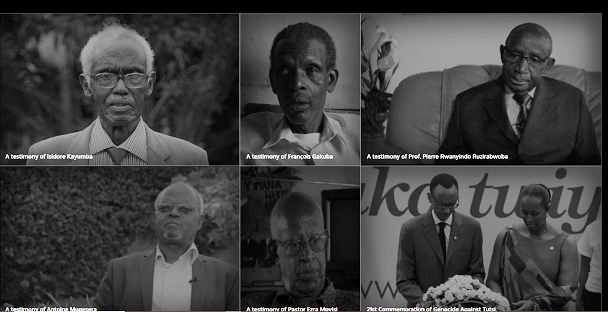 Similarly it happened for photos, that have been scanned and stored digitally, for audio recordings or audio visual footage.

This Archive is managed by the Aegis Trust, an International organization working to prevent genocide and mass atrocity in line with what is stated in the Convention against genocide.

The Contracting Parties confirm that genocide, whether committed in time of peace or in time of war, is a crime under international law which they undertake to prevent and to punish. (Article I, Convention of the prevention and punishment of the crime of genocide – UN, New York 9/12/1948).