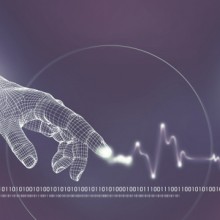 The phenomenon of globalisation and the spread of digital infrastructures – which are both the means and the cause of globalisation itself – have been creating an interrelation among the fields of culture, once considered very distant. Today, the sciences, the arts, the humanities, while retaining irreducible differences, tend to meet, contaminate and mutually enrich through the use of new media and new technologies.

DIGITALMEETSCULTURE is intended as a portal for gathering information about the digital culture in the world, taking into account the different approaches that science, cultural heritage and arts have to the digital age. This portal aims to act as a reference point and as a valuable mean of information and communication for different users in a global dimension. It is conceived as a meeting place between technologies and arts & humanities.

The use of the network and digital technology is evolving towards more and more interactive forms, with a clear trend towards the interchangeability of roles between sender and receiver of information (Web 2.0).

In particular, the speed and the amount of information offered by new technologies, allow, through specific projects, to increase the accessibility to cultural heritage: works of art, texts and documents, whose physical accessibility is limited by many factors, can be readily available to the global network, thus increasing the possibilities of use and approaching researchers, experts, enthusiasts and curious ones to a field which initially was elitist.

In addition, more and more artists of every discipline, from visual to performance arts, use computer technology as a tool and the web as a space for displaying and disseminating their works.

DIGITALMEETSCULTURE aims to promote and to foster the spread of the digital culture for its considerable innovative impact on the society, for its positive effects on the circulation of information and on the communication of ideas among and across different fields and for its contribution to creative thinking.

The portal is composed of two specific areas dedicated to the cultural heritage in general and to the digital art.

The section DIGITAL HERITAGE collects articles and information about projects and initiatives for the digitisation and access to the digital cultural heritages all over the world. The key point at the base of this section is to give visibility to the institutions which work for preservation, to companies which develop tools and problem solving, to users who get benefit or gratification from digital cultural heritage. 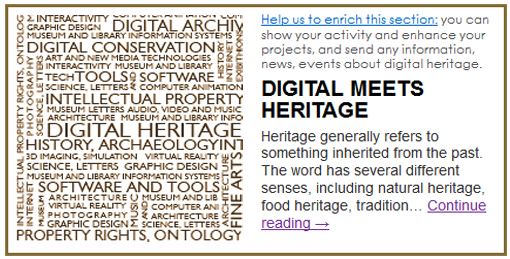 click above for more information on Digital Heritage section —>

The section DIGITAL ART wishes to focus on the latest, innovative forms of the digital art in any expression and to give space and visibility to upcoming events and discussions about this large, open and evolving topic. Conferences and seminars, interesting dates and case-studies will be collected and nice showcases dedicated to associations, artists and companies, provided with many information and amazing multimedia contents in every format, will offer a wide overview about what’s going on. 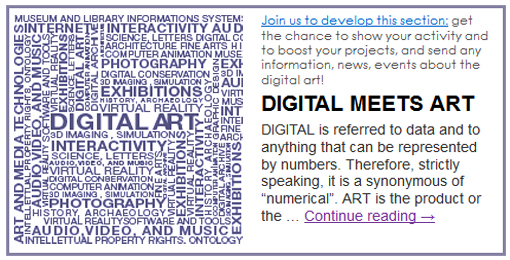 click above for more information on Digital Art section —>

Digitalmeetsculture.net has been appointed media partner of the following events

and of the following projects/initiatives/magazines