On the 18th February 2014, in the beautiful premises of the National Museum of Slovenia, it was held the third plenary meeting of EAGLE project, which included a special training session for the content providers. 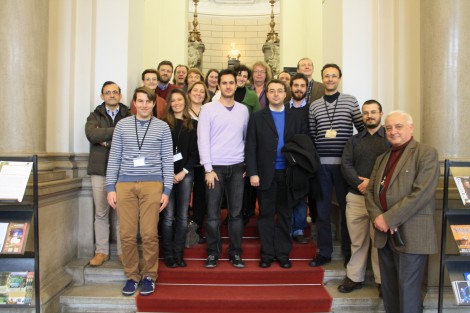 The meeting, which was joined with the EAGLE Public Workshop “Current Practices and New Directions in Digital Epigraphy“, was opened by Marjeta Šašel Kos from the Scientific Research Centre of the Slovenian Academy of Sciences and Arts, Institute of Archaeology, who talked about the beginnings of Roman epigraphy in Slovenia (download the slides and the introductory text).

The morning session was dedicated to check the status of the project and to plan the next steps. Silvia Orlandi, Claudio Prandoni, Pietro Liuzzo, Valentina Vassallo updated all the partners about the progress of each Work Package highlighting the most important issues and action items to be taken into consideration in the coming months.

In the afternoon a more practical workshop followed to present to the content providers the aggregation infrastructure, the services that are available to upload and check the content and the ingestion plan to provide to Europeana the first set of metadata. The workshop, which was organised by CNR-ISTI (Andrea Mannocci, Giuseppe Amato) and The Cyprus Institute (Valentina Vassallo) included also a demonstration of the image recognition algorithm which will be intergated in the EAGLE Mobile Application to help users to get more information about an inscription by sending a photo of the epigraph.

Below, some photos taken at the plenary meeting in Ljubljana by Andrej Šemrov and Matija Pavlovec.

Next appointment for the EAGLE project will be on the 29-30 September and 1 October 2014 in Paris, with the First EAGLE International Conference on Information Technologies for Epigraphy and Digital Cultural Heritage in the Ancient World.