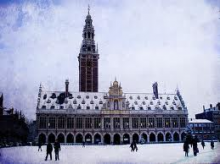 KU Leuven is a research-intensive, internationally oriented university that carries out both fundamental and applied research. It is strongly inter- and multidisciplinary in focus and strives for international excellence. To this end, KU Leuven works together actively with its research partners at home and abroad. Founded in 1425, KU Leuven bears the double honor of being the oldest existing Catholic university in the world and the oldest university in the Low Countries. KU Leuven combines a rich tradition with top research & technology. There are more than 38.000 students, about 2.000 academic staff and more than 4000 junior researchers.

Pope Martin V issued a papal bull dated 9 December 1425 founding the University in Leuven as a Studium Generale. This university was institutionally independent of the local ecclesiastical hierarchy. From the founding of the university to its abolition in 1797, Latin was the sole language of instruction.

From the founding of the University in 1425 up until 1636, there was no official library of the university. The students had access to manuscripts and printed books preserved in the homes of their professors or colleges. In 1636 a university library was founded in the Leuven Cloth hall, and about a century later it was enlarged in a baroque style.

After the French Revolutionary Wars, once the Netherlands were formally integrated into the French Republic, all universities in France had to be closed by law, and the University of Leuven was abolished. What remained of the university’s movables and books were requisitioned for the École Centrale in Brussels, as the official replacement of the abolished university, although its most precious books and manuscripts were deposited in Paris in the Bibliothèque Nationale de France. Later, the Central School in Brussels was closed down and a new Catholic University established in Leuven in 1835.

During WWI and WWII the town suffered from bombing and pillage, but the University withstood bravely. The German troops invaded the town and the library was burned in 1914 (indeed it was not the original library of the old University, but the new library of the new Catholic University of Leuven – but a cruel event the same!). In 1940 the town was seriously damaged by bombing… and still survived.

In 1968 the bilingual Catholic University of Leuven split into two “sister” universities, with the Université Catholique de Louvain departing to a newly built, greenfield campus site in the French-speaking part of Belgium and the Dutch-language university becoming a fully functioning independent institution in Leuven.

Bruno Vandermuelen, from the Faculty of Letters, talks about the digitization facilities available at the University digital lab, helping digitization for EuropeanaPhotography EC project and others.

Bruno, digital technology and preservation for the ancient books: what are the most specific issues you meet during every day work at Alamire digital lab?

The Alamire Digital Lab at the University Library has been specially adapted for high-end digitization with for instance controlled climate, dark walls, different sets and setups. The manuscripts we photograph are rare and sometimes extremely valuable. Before photographing, we look at the binding and how the manuscript behaves when turning the pages so we can position the book safely. The equipment for digitizing is camera based as scanners pose a higher risk damaging the manuscripts. It also gives us the flexibility to adapt how we photograph to the way the manuscript behaves. With the cameras and appropriate lightning we can also go to archives as manuscripts sometimes can’t always leave their institute. 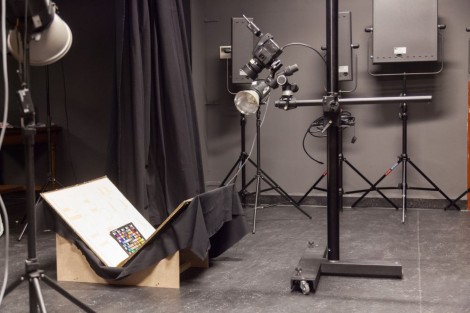 Photographing manuscripts closeby with high-resolution digital backs (80-100 million pixels) is also challenging as the tolerances you work within are very narrow. Depth of field, sharpness, vibration due to mirror slab, focus calibration, color calibration, diffraction, alignment, all come into play and can become problematic when not well controlled.

Working in a controlled environment as the Alamire Digital Lab helps to speed up the workflow from capture to archiving. Contrary to for example a fashion shoot where only the best images are processed and kept, we keep and process every image we make. Photographing in a RAW format enables us to work with presets, which we can apply to a set of images. Processing takes time as the final archival tiff file of a single image is about 230 MB; some manuscripts contain 500 pages and more.

Apart from the high-end digitization we also focus on development of visualization techniques for art-technical research in cultural heritage, like UV, IR, 3D. These modules are developed in collaboration with engineers of the KU Leuven. The main advantage is that we can assess the object in a non-destructive way. 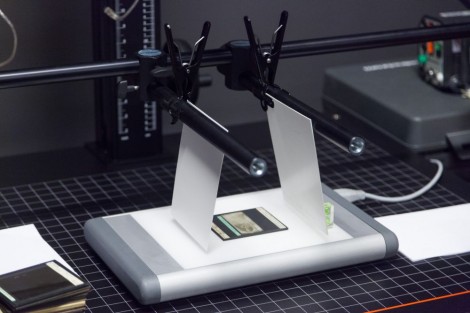 With our faculty wide DAM (Digital Asset Management) system dARTS we can annotate, search and retrieve the images is the format we need. Various research and educational projects make use of the central image repository to curate and disseminate their collections, both online and offline.

Nowadays, digital technology applied to photography has opened an unceasing debate about the fact that good digital cameras are easily accessible also to amateurs, and editing software allows almost anyone to get good results, even starting from a poor shot. As a photographer, what is your position: is digital technology improving or damaging photography?

The technology is there and evolving rapidly, so we better make use of it. It’s definitely improving photography. On the technological side the resolution of high-end cameras and the quality of the files even surpass large format cameras. Software also keeps improving, which is important because you can process your older RAW files with the latest software and possibilities.

In the digital age, as a photographer, you are again in total control of the output. In the film days you selected your films in function of what you photographed or the effect you wanted. After exposure you brought the film to the lab to process and that was the end. Now, with good software available, you can make your own film, or create your own look. With good equipment becoming accessible to the broad public, vision, how you photograph, how you approach your subject, how you present your work has become very important. A camera is just a tool, photography is about what you do with it and that hasn’t changed over the years.