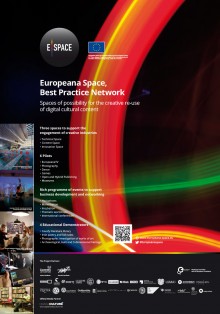 in Paris, a very important event of the Europeana feeder project EAGLE included a poster session where the E-Space poster was displayed
Poster dissemination at EAGLE International Conference

Europeana Space brand new poster has been presented at the International Conference on Information Technologies for Epigraphy and Digital Cultural Heritage in the Ancient World organised by the EAGLE project. The poster is also showcased in the Conference Digital Exhibition web page. END_OF_DOCUMENT_TOKEN_TO_BE_REPLACED

Paris, 29-30 September and 1 October 2014
PREFORMA at the EAGLE International Conference

A poster of PREFORMA has been presented at the International Conference on Information Technologies for Epigraphy and Digital Cultural Heritage in the Ancient World organised by the EAGLE project. The poster is also showcased in the Conference Digital Exhibition web page. END_OF_DOCUMENT_TOKEN_TO_BE_REPLACED

Rome, 16 May 2014
Best Practices for the Fruition and Promotion of Cultural Heritage

The event, organised by EAGLE and Wikimedia Italia with the support of Soprintendenza Speciale per i Beni Archeologici di Roma, aims to serve as a platform for sharing knowledge and good practices while stimulating reflections on the role of digital technologies in the preservation and promotion of cultural digital heritage. At the end of the event, the winners of Special EAGLE prize for WikiLovesMonuments Italy will be announced. END_OF_DOCUMENT_TOKEN_TO_BE_REPLACED

On the 18th February 2014, in the beautiful premises of the National Museum of Slovenia, it was held the third plenary meeting of EAGLE project, which included a special training session for the content providers. The meeting was joined with the EAGLE Public Workshop ‘Current Practices and New Directions in Digital Epigraphy’. END_OF_DOCUMENT_TOKEN_TO_BE_REPLACED

The European Commission has launched a public consultation as part of its on-going efforts to review and modernise EU copyright rules. The consultation invites stakeholders to share their views on areas identified in the Communication on Content in the Digital Single Market, i.e. territoriality in the Single Market, harmonisation, limitations and exceptions to copyright in the digital age; fragmentation of the EU copyright market; and how to improve the effectiveness and efficiency of enforcement while underpinning its legitimacy in the wider context of copyright reform. END_OF_DOCUMENT_TOKEN_TO_BE_REPLACED

Digital Humanities Awards are a new set of annual awards given in recognition of talent and expertise in the digital humanities community and are nominated and voted for entirely by the public. There is no financial prize associated with these community awards, just the honour of having won and an icon for your website. By its work at making available, with the most advanced digital technologies’ support, the vast majority of the surviving inscriptions from the Greco-Roman world, we think EAGLE can be a valid and qualified competitor for 2013’s edition of DH Awards. END_OF_DOCUMENT_TOKEN_TO_BE_REPLACED 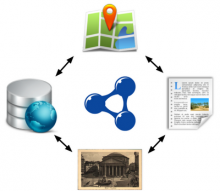 EAGLE (the Europeana network of Ancient Greek and Latin Epigraphy) joins Pelagios, a collective projects which aims to help introduce Linked Open Data goodness into online resources that refer to places in the historic past. By joining Pelagios, EAGLE will be able to connect with other major online projects about the Ancient World and make its data accessible to other aggregator and LOD projects. END_OF_DOCUMENT_TOKEN_TO_BE_REPLACED

EAGLE consortium recently met in Pisa for discussing and proceeding towards the project’s next steps. Next appointments for the EAGLE project are on the 18-20 February 2014, in Ljubljana, joining the Plenary Meeting with Workshops, Training, and a Public Event. Still to be confirmed as for dates and venues, the first EAGLE International Conference will also take place in early autumn 2014. END_OF_DOCUMENT_TOKEN_TO_BE_REPLACED

This event was aimed at anyone interested in epigraphy (digital or non-digital) as well as to the establishment and diffusion of general best current practices for digital editions. It covered many aspects of digital technology applied to inscriptions, from content to management and networking. It was composed of 3 workshops (Harmonization and interoperability of Inscriptions, Translations of Inscriptions, Intellectual Property Rights) and a photographic workshop on shooting high quality images for online publication and research. END_OF_DOCUMENT_TOKEN_TO_BE_REPLACED