The first BMW featured the 3 finalists that participated in the Europeana TV hackathon held in May in Amsterdam. And the winner is.............
Announcing the winners! Business Modeling Workshop of Europeana Space

by Simon Cronshaw, REMIX Europeana Space consortium is very pleased to announce that we’re now embarking on the Incubation process of the winner of the first Business Modelling Workshop of the project, held in London on 26th June, following the … END_OF_DOCUMENT_TOKEN_TO_BE_REPLACED 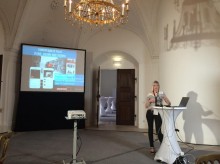 At the Europeana Creative “Culture Jam” event, closing conference of the widely praised Europeana Creative project at the National Library of Austria (July 9th and 10th), the Europeana Space project was brought to the attention of the creative industry scene in Austria. During various sessions the EuropeanaTV pilot was demonstrated and the upcoming hackathons and business modelling workshops were announced. END_OF_DOCUMENT_TOKEN_TO_BE_REPLACED 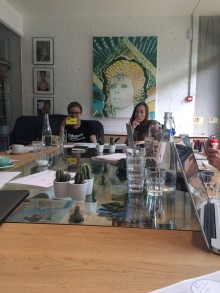 The first BMW featured the three finalists that participated in the Europeana TV Hacking Culture Bootcamp in Amsterdam at The Waag Society on May 8, 9, 10. These three finalists were Bosch, ART(F)INDER, and Mnemosyne. Over the next week Remix and the Netherlands Institute for Sound and Vision will review the final business model canvases for each project and decide which will win the coveted Europeana Space Incubation Support Package provided by Remix and the project consortium. END_OF_DOCUMENT_TOKEN_TO_BE_REPLACED

In February 2015, a lab test was designed to investigate the usability of the Berlin Wall application, which is representative of an interactive TV application using valuable cultural heritage content. The test was conducted with the on-air application. Test participants were … END_OF_DOCUMENT_TOKEN_TO_BE_REPLACED

by Kelly Mostert, NISV During the 2015 ACM TVX conference, hosted by the iMinds Digital Society Department, that took place on the 3rd – 5th of June at the Crown Plaza Hotel in Brussels the EuropeanaTV pilot of Europeana Space … END_OF_DOCUMENT_TOKEN_TO_BE_REPLACED

All the ideas were unique and exciting in their own ways and jury deliberation certainly was difficult.
Hacking culture for E-Space: TV hackathon successfully concluded!

The three most promising projects will move on to the Europeana Space Business Modelling Workshops where the projects’ ideas will be further shaped and honed as well as the development of business models with the experts from the REMIX Summit Agency and their elite network. END_OF_DOCUMENT_TOKEN_TO_BE_REPLACED 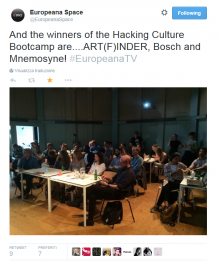 Participants had the opportunity to experiment with smart audio/video formats and come up with inspiring TV applications
Hacking Culture Bootcamp SUPER-success in Amsterdam!

This weekend the first E-Space hackathon took place in Amsterdam, from the evening of the 8th until the 10th of May. The event, organised by the Europeana TV pilot of E-Space project, was challenging game and app developers, storytellers and interactive designers to create new multi-screen experiences with a focus on digitised historical footage. Winners will now fly to London for an intensive Business Modelling Workshop! END_OF_DOCUMENT_TOKEN_TO_BE_REPLACED

Hacking Culture Bootcamp, the first hackathon of Europeana Space project, took flight on 9 April 2015 with the pre-event, where the hackathonees met the team and learnt practical information about technology, the toolkit and available content for experimenting with Europeana TV pilot. END_OF_DOCUMENT_TOKEN_TO_BE_REPLACED 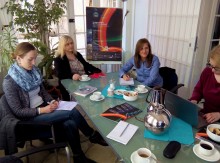 The partners pointed out how they can benefit from each other, and how such a cooperation can support the goals of the Europeana Space project.
TV Pilot meets Museums Pilot: cooperation and link between two E-Space pilots

On Monday the 16th March 2015, the German partners of the E-Space TV Pilot and the E-Space Museums Pilot had a meeting concerning their cooperation, at the Institute for Museums Research in Berlin. Photo by Beatrix Lehmann (Museumsmedien) END_OF_DOCUMENT_TOKEN_TO_BE_REPLACED

On 25-26th of February 2015, the EuropeanaTV team organized a workshop at Rundfunk Berlin-Brandenburg (RBB) in Potsdam to work out a SmartTV app. It had to use RBB content about the Berlin wall together with related materials from Europeana. This workshop is part of the work realized in the TV pilot of Europeana Space project. END_OF_DOCUMENT_TOKEN_TO_BE_REPLACED