The first BMW featured the 3 finalists that participated in the Europeana TV hackathon held in May in Amsterdam. And the winner is.............

Europeana Space consortium is very pleased to announce that we’re now embarking on the Incubation process of the winner of the first Business Modelling Workshop of the project, held in London on 26th June, following the TV Hackathon which took place in May in Amsterdam.

We had three very interesting ideas emerging from the TV Hackathon, named Bosch, ART(F)INDER, and Mnemosyne, but had to choose one winner that we felt best met the judging criteria objectives:

The winning proposition still has the internal working title of “Mnemosyne”, but will be launched under a new name over the coming months. 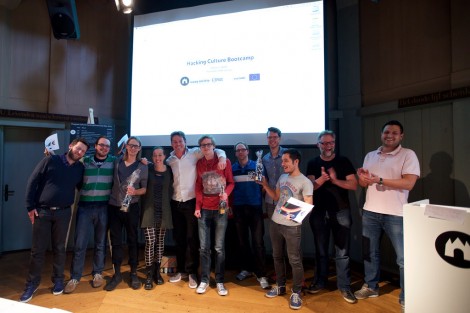 We were drawn to Mnemosyne because it has several different components, and is a well placed to capitalise upon several consumer and industry trends. Among other things, it offers an innovative user interface for online catalogues; an algorithm for serendipitous browsing across different disciplines; and a hardware installation for physical environments. One of the most attractive aspects of this proposition are the multiple revenue models and markets available to them, which we’ll be unpicking in due course as part of the Incubation process.

It is still very early stages for Knut, Marius and the rest of the Mnemosyne team, but over the next few months we’ll be working closely with them to develop a strategy that gives them the very best chance of succeeding as a commercially viable cultural startup, on the basis of the Europeana Space Incubation Support Package.

We look forward to keeping you updated on their journey, and wish them the very best for this exciting new enterprise!

You can read the Amsterdam hackathon report here and watch the video report here, plus learn more on the Business Modeling Workshop in London here.