Bratislava Theatre Institute is a partner of EuropeanaPhotography project

We who like to attend theatre productions, we all know, how powerful and sometimes lifelong experience can leave a single performance – despite the fact that it only exists in time of meeting of artists with audience. At the present moment, at which the theatre exists, consists its strength and weakness. After a season or two, sometimes even sooner, no one has a chance to repeat the experience that touched us so deeply. Maybe in a year or two we would see the same staging differently – but we do not have a chance. It is even more difficult than in life: in our personal story, sometimes we could turn time back to find a new way, try it again … Theatre is team art of artists and audience, and the chances of a successful return are slight.

More recent theatre productions are captured on video in a better or worse quality, therefore we could reconstruct them, even in the absence of the most valuable part of it – without the meeting of people in the same time and space. Theatre criticism could also help to preserve something of the essence that a staging brought in particular time and particular space, but it is transformed by the writer’s personality. At first glance, theatre photography looks objectively – on a closer inspection, however, especially in the elderly time, we realize, how important role in the capture of live theatre through the viewfinder of the camera has a standard of photographic technique, and lastly – behind a camera is always a man with his or her taste, experience, influenced by many other non-artistic factors.

Old photos are often the only witness to the theatrical life of our great grandparents that we have. They are usually identified, but sometimes we do not know anything. We look into faces of strangers in theatrical costumes, see their fascination by Thalia, we realize the transience of theatre, of nationalities that for example used to live in the territory of contemporary Slovakia, we are confronted with our own mortality.

Theatre Institute as a partner of the European project Europeana Photography began in 2012 to digitize and describe the oldest theatre photos in today’s Slovakia. Until December 2012, has been digitized and described a collection of more than 4300 old photographs, created before 1939.  Thus we create a basis for a valuable collection of the oldest theatre photographs in the territory of the contemporary Slovakia – and for a future exhibition and a book.  In the preparation of the collection we cooperate with the Slovak National Archive, the Slovak National Library, the Slovak National Museum, the Bratislava City Museum and other institutions and individuals.

To our collection gradually arrive more and more theatrical and even para-theatrical old photos from the period 1839-1939. They capture not only amateur and professional theatre productions in the territory of the contemporary Slovakia, but also urban and rural staged celebrations and social life with theatrical attributes (balls, military parades, memorial exposures etc.), portraits of theatre personalities, theatre spaces (interiors and exteriors), theatre architecture, theatrical activities of Slovak minorities living abroad and also staged photographs with strong theatrical elements. The result will be in 2015 a unique collection of digitized old photographs that would otherwise be lost, discarded or remain forgotten. 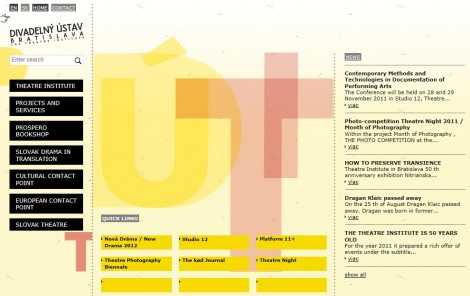