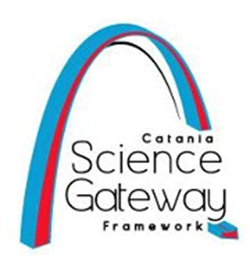 The general architecture of the Catania Science Gateway Framework and some of its implementations are the subjects of this webinar which is jointly organised and supported by CHAIN-REDS, eI4Africa and EGI-InSpire projects.

At the webinar attended more than 30 international experts worldwide.

The recording of the webinar on the Catania Science Gateway Framework is available at http://connect.ct.infn.it/p6b7rdr32sg/

Wanna get more web-based training on the development of Catania Science Gateways ? Fill the doodle at http://doodle.com/2khyhb383i65bru

One of the main obstacles for non-IT-expert users to exploit e-Infrastructures, such as Grids, is the fact that they are based on complex security mechanisms such as Public Key Infrastructures (PKI) and accessed through low level (command-line based, i.e. non-graphical) user interfaces.
The approach described in this webinar to tackle both this problem and make e-Infrastructured easlily and ubiquitously accessible to the largest possible number of users (including the “citizen scientist”), was to deploy them into a “Science Gateway” whose access is regulated by “Identity Federations”.
In the recent past, interesting developments have actually been independently carried out by the Grid community with the Science Gateways and by the National Research and Education Networks with the Identity Federations to ease, from one side, the access and use of Grid infrastructures and, from the other side, to increase the number of users authorised to access network-based services.
A Science Gateway is a “community-developed set of tools, applications, and data that is integrated via a portal or a suite of applications, usually in a graphical user interface, that is further customized to meet the needs of a specific community (US Teragrid/XSEDE project).”
An Identity Federation is made of “[…] the agreements, standards, and technologies that make identity and entitlements portable across autonomous domains (Burton Group)”. Identity Federations have the aim of setting up and supporting a common framework for different organisations to manage accesses to on-line resources. They are already established in many countries and currently gather a number of people which is in the order of O(107).
To make e-Infrastructures easy to use and more accessible, the Italian National Institute of Nuclear Physics and the Consorzio COMETA are developing since more than two years the Catania Science Gateway Framewok to create a new type of Science Gateways that implement an authentication schema based on Identity Federations.
The general architecture of the Catania Science Gateway Framework and some of its implementations are the subjects ot this webinar which is jointly organised and supported by CHAIN-REDS, eI4Africa andEGI-InSpire projects.

Interested people are invited to register following the link which appears on the event home page:

Where the timetable is also already available.