United Archives now own the lost treasure of a visionary man, who used photography to show the big world to the people. 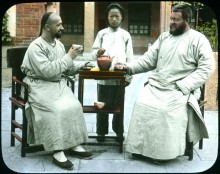 The Carl Simon Archive was a sleeping treasure of photos for 60 years. In  2011 finally the sensational  life work of Carl Simon was rediscovered in an old storage room in Unterbilk, part of the city of Düsseldorf, Germany.

Carl Simon (1873-1952) first worked as procurator at the German photo company Liesegang in Düsseldorf and he founded his own company Lichtbild-Anstalt Carl Simon & Co. in 1907, where he offered services for the upcoming photo industry.

He constructed cameras, lent slide projectors and began to collect wonderful hand-coloured glass slides. The most important part of his activities were live slides performances. Carl Simon had the ambition to show the big world to many people and presented about 300 slide performances to amazing spectators in whole Germany. 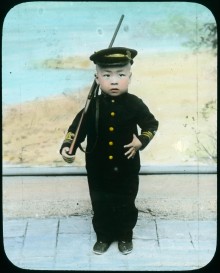 During these events, whilst showing the photos, an actor read a special text for each image and, last but not least, a small orchestra was playing background music.

Till 1945 Carl Simon collected 80.000 images. Over the years more than 23.000 still has survived. After his death Karl-Heinz Simon (1920-2002), his son curried on with the tradition of slide shows performances till to the 1960s. The End came with the introduction of television.

There are several beautiful photographic trips within this marvelous collection: for example Rome, cities of Germany – Berlin and Munich – The Montblanc, life in East Africa, Asia, a travel through France, earthquakes and volcanic activity, Japan, China mission, Tibet, the sinking of the Titanic and many more “Highlights” of  glass slide photography.

End of March 2012 Frank Golomb bought this unique photo archive and United Archives now can proudly present the complete Carl Simon Archive as exceptional content for their clients and partners.

United Archives is one of the most important partners of Europeana Photography project. The company was founded 1956 as Kövesdi Press Agency in Amsterdam and is called United Archives since 2007. In the early days the company was working as a press photo agency with offices in all major cities in Europe and supplied publishers with content linked to Cinema, Actors, Television. The company produced material on sets and acquired archives with images lasting back to the beginning of cinema history.

A huge part of the United Archives is unexplored, in negative roles, glassplates, and only very few images were digitalized from negatives so far. In the lifetime of the Europeana Photography project United Archives will explore these unseen collections and the plan is to produce 40.000 images as a mix coming from all collections.