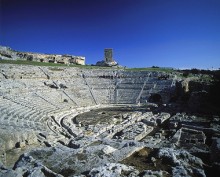 The 3D laser scanning of Sicily’s Siracusa Theater taking place between 21-26 October 2012, is a major event within the ATHENA Project of the Ancient Theaters Enhancement for New Actualities.

“The Siracusa digital surveying is part-and-parcel of the scanning being carried out in all the ATHENA sites, and is in parallel to the scanning currently going on of the Cherchell and Tipaeza by a Jordan team of surveyors from the Department of Antiquities,” says ATHENA Project Manager Nizar Al Adarbeh. “This will lead to the collection of raw data to be used for the protection and long-term sustainability of ancient theaters in the Euromed region,” adds Al Adarbeh.

The Siracusa scanning is the result of networking between ATHENA Project Amman and the Dipartimento di Storia dell’Architettura, Restauro e Conservazione dei Beni Architettonici e stato of the Sapienza Universita di Roma (Department of History of Architecture, Restoration and Conservation of Heritage, Sapienza University of Rome).

A full team from the Dipartimento di Storia in Rome is hence performing the scanning that is part of a “ATHENA Week” aimed at improving the general knowledge and creating awareness of ancient theaters in the Euromed region.

As with other scanning made in the theaters of Merida (Spain), Petra and Jarash (Jordan), and Carthage (Tunisia) the profiling and documentation activity is accompanied by the training of local professionals officials and students on the latest digital technologies to improve and protect the state of ancient theaters in that region of Italy.

“This is the fourth ATHENA Week after the full activities made in Spain, Jordan and Tunisia, and we are following suit to strengthen the links between the theater, its history, functions and use” says Italian Project Leader Dr Carlo Bianchini.

The six-day activity, which ends in a final conference for dissemination and discussion, is made in cooperation with the Department of Antiquities/ATHENA Project, Jordan, Parco Archeologico di Siracusa (Archaelogical Park of Siracusa, Sicily), Dirección Regional para el Patrimonio Cultural (Regional Direction for Cultural Heritage) and the Centro Regionale per il Restauro (Regional Center for Restoration).