ATHENA Workshop Training for the ‘Management Plan’ in Amman

Heritage and Tourism Sustainability Move on the Right Path

It’s a marathon, hardcore training in the field of site-management sustainability to upgrade the level of culture and create a permanent link between heritage and tourism.

This is the sum total of the recent workshop titled “Training for Sustainability, Site Management Plan: From Theory to Practice”, that was attended by 39 site managers and other archaeological professionals in Amman between 18-22 November, 2012.

The training was organized by the Department of Antiquities/ATHENA Project and conducted by Silvia Barbone, Director of Jaylag in Brussels and London. She flew directly to Amman to give the five-day session that was attended by those who work in the field from Amman and different archaeological directorates in the governorates of Jordan.

ATHENA Project Manager Mr Nizar Al Adarbeh spoke at the beginning of the first session contextualizing the workshop within the ATHENA Project philosophy to enhance and sustain ancient theater sites by providing new techniques, methods and concepts to improve the level of sustainability. The Ancient Theaters Enhancement for New Actualities is funded by the European Union under its Euromed Heritage 4 Program.

Silvia Barbone said it is important to understand the linkage between heritage and tourism sustainability when creating a management plan to realize that great benefit can be achieved in the end for tourism.

Right from the beginning she set the tone, telling the trainees they will be expected to come up with a concrete management plan that would integrate all the elements combining heritage, sustainability, tourism, local actors including NGOs, and the public and private sector. 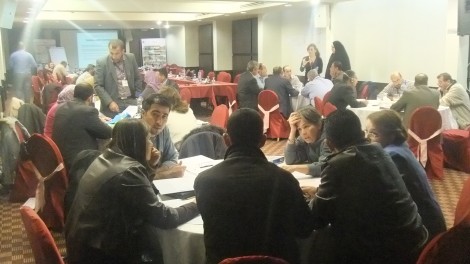 As this was a practical training workshop, she first spoke to the trainees who sat on a U-shaped table about the different features of a management plan, different sites involved, criteria expected to follow and the international standards involved and should be followed.

The trainees were split in the afternoons into groups that represented different archaeological sites like the Amman Citadel, Karak, Mkeiwer, Jarash, Umm Rassass, Umm Qais and Umm Jmal all of which are important archaeological and heritage sites in Jordan that existed since time immemorial.

These sites are important because the groups are expected to present management plans for each of these important ruins to be completed in 20th December, 2012, which is after all the purpose of this training workshop.

Linked to this, something which Barbone talked about is the international certification the trainees might be able to get at the end of the course when the second part of the training is held between 6-10 January, 2013.

The PM4ESD (Project Management for European Sustainable Development) is an important accreditation by APMG-International that is promoted at the European Union and Mediterranean levels and will be the first to be applied in Jordan among the ATHENA trainees.

Barbone stated that the eligibility to sit the exam is commensurate with each group presenting a draft of the Management Plan and taking a mock test which they have to pass.

The sessions during the five days were highly interactive between the trainer and trainees. Away from the U-shaped table, the trainees networked with each other as separate groups. The trainer stayed in the background, going among different groups to see if any help was needed. 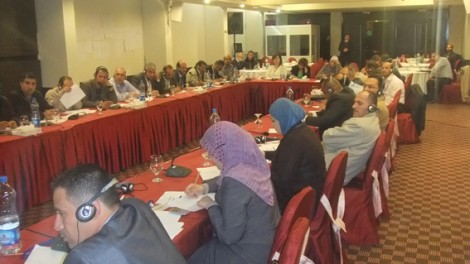 At the U-shaped table

At the end of the afternoon sessions trainees were back to the U-shaped table to present their findings to the whole of the groups. For the whole four days—the last being practical fieldwork in the Jarash ruins taken as a practice study to the theory—the atmosphere was productive and congenial.

The interaction was underlined during the group sessions, and which continued during the field visits, with much animated discussion between the members who were from different archaeological directorates, like those from Karak in the south to Amman in the center and Umm Qais in the north.

The training was important because it aimed at readjusting the mindset and the creation of methodological linkages between heritage and tourism. Managers and professionals in archaeology were for instance introduced to new concepts of tourism sustainability. 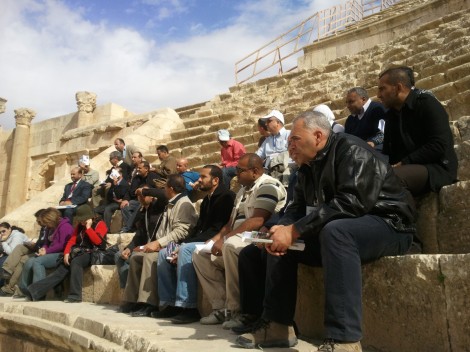 Thinking hats and issues of balance were important and stressed between the two. Trainees were reminded of the need for a balancing process that extended to the heritage site, its surrounding environment, local community, the business angle, question of knowledge community that involve universities and research institutes.

The last day of the session was spent amongst the Jarash archaeological ruins. It was a field trip for practice onsite work. The trainees started their observations at the car park and handicraft shops with Barbone telling them to make an assessment of the place.

They looked for obvious things like signage about the location and services available like toilets for visitor’s as they made their way through the old, now restored Hadrian Gate onwards to the ruins, and passing through the Roman Hippodrome.

Before they went to the South Theater which is one of the sites under study in the ATHENA Project, they passed through to the Jarash Visitor’s Center which also house the offices of the Department of Antiquities, whose hall was filled with information on the Jarash ruins.

At the South Theater everyone sat and contemplated at the detailed structure of the place. A well-worthwhile visit for the expected management plan.