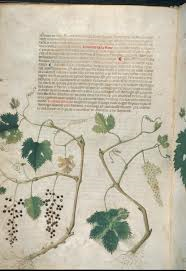 In the IPSA website it was difficult to identify all the manuscripts made in the same place: in fact, by inserting a place name in the search engine, e.g. Veneto, the user was shown all the illuminations belonging to manuscripts made in this area, in this case more than 1000 images, a huge amount of resources to handle. Furthermore when the user was shown all the results he was not able to know to what metadata category the word Veneto referred to (e.g. provenance, call number etc.). In CULTURA, thanks to the wheel visualization, it is possible to see at a glance the provenance of each manuscript. For example, if a researcher is interested in the iconographic development of botanical subjects in Northern Italian illumination, and he is browsing the images of the Pseudo-Apuleio’s De herbarum virtutibus of the Botanical Garden Library of Padua (ms. Ar. 26 n. 123), he can visualize the entity network of each image and find out whether the same plant is represented in other manuscripts made in Northern Italy (“Italia settentrionale”). 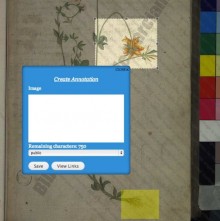 In IPSA it was impossible to annotate a single image: the user could annotate the link established between two images, but he had not the possibility to register his thoughts and reflections about a single illumination. In CULTURA researchers can both annotate the whole image and make annotations on a single detail of an illumination. In particular this tool is very useful for art-historians, as often slight differences in the pictorial technique and iconography help to recognize the work of an artist, or to connect an illumination to its right art-historical background. E.g. if a researcher wants to highlight the extraordinary realism of the Erbario carrarese illuminations, in CULTURA he can do this by making an annotation for each of the details that characterize the Erbario Carrarese style as realistic: the leaves, that are painted in different shadows of green to suggest the presence of real light, the different measures of leaves, branches and fruits, and so on. 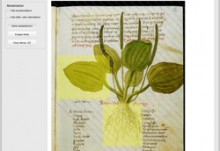 Normalization of the plant names

IPSA is a collection of medieval manuscripts and it is a matter of fact that in ancient times botanical names did not have a standard form, moreover the manuscripts held within the archive are written in different languages (Latin, Italian, Venetian dialect etc.); for these reasons it is pretty common to find the same plant called in different ways and it represents a problem since such a variety entails difficulties in making consistent queries.

In particular there are two major problems: 1) spelling issues, i.e. what we call today “wormwood” in English is found in IPSA as “absinthium“, “absenço“, “abscinthium“, and there is no explicit link between all those variants, even if they look similar to a human eye; 2) lexical issues, i.e. the plant that today is called “cucumber” in English, within the IPSA archive, this plant is called “citrollo” in one manuscript and “cogombaro” in another one.

Using CULTURA, thanks to the normalization of plant names, many links can be now established between plants that did not seem to have anything in common before. For example, if now a user wants to research the word wormwood within the archive, he is shown all the images containing a representation of this particular plant, despite of the several ways the plant is called within the different texts.

This improvement allow researchers to study the iconographic and stylistic development of the same subject in different geographical areas and historical periods.