The use of digital technology has become important for the preservation of heritage and culture. In the ATHENA Project of Ancient Theaters Enhancement for New Actualities 3 D technologies have become part-and-parcel in the work actions to halt the progressive decay whilst inducing sustainability of these age-old ancient structures. 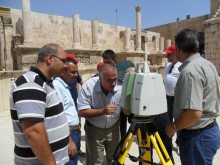 The acquisition of the latest laser scanner and total station by the Department of Antiquities (DoA) in Jordan as part of their leader role in the collective consortium of Italy, Tunisia, Algeria and Spain, is helping to conserve ancient theaters in the Euromed region by profiling and documenting them as well as providing the necessary training.
“The top-of-the-art scanning technologies have been essential as a way for more effective documentation and to halt the progressive decay of these ancient theaters because these are precision instruments that allow you to detect the minutest of cracks in different facades and profiles,” says ATHENA Project Manager Nizar Al Adarbeh.

As part of the ATHENA spirit of cooperation two DoA surveyors completed their training on the new technologies under the direction of an Italian team from the Dipartimento di Storia dell’ Architettura, Restauro e Conservazione dei Beni Architettonici e stato of La Sapienza University. Soon after they started to use the equipments to scan, document and analyze the collected data of the different archaeological sites in Jordan.
In addition to Petra and Jarash which they have trained on and collected enormous amount of data, surveyors Jamal Safi and Tawfiq Al Hunaiti scanned and documented the UNESCO World Heritage Site Qusair Amra, Umm Qais and Tell Emari as well as many others in the Kingdom.
“We have done much work in the digital scanning of very important sites in the Kingdom, and now these are documented and ready to be used for restoration purposes,” says Jamal Safi, who together with Al Hunaiti received the final part of their training in data analysis in Rome in March 2012.
As well as digital profiling, the two-man team under the direction of the ATHENA Project in the DoA also began holding training workshops as a means of spreading the knowledge and knowhow about these new technologies’ acquisitions to professionals involved in restoration works. 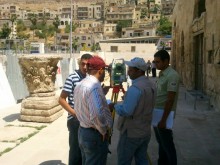 The first training was held at the Amman Odeon in the downtown area between 19-24 May, 2012 for 17 members of staff of the different sections of the Department of Antiquities to allow them to become familiar with the new technologies as these are very important tools in the process of documentation.

The second training session was held in Amman Roman Theater between 2-4 September, 2012, for 16 staff from the different DoA directorates in Jordan, coming from as far as Karak in the south of the country, mid-Jordan Valley, Amman and from the north including the Irbid, Ramtha, Ajloun and Al Qoura areas.
These training workshops were made in two parts. The “theoretical” side was carried out in the DoA auditorium were trainers Al Safi and Hunaiti talked about the equipments and importance for documentations and archaeological preservation. At this stage the trainers demonstrated the different functions and uses of the laser scanner and total station and allowed participants to examine them.
The practical side of the workshop training was in the field. “This was the case in both the Odeon and Roman Theaters training in Amman where participants took part in actual scanning and surveying of different facades and structures,” says Tawfiq Al Hunaiti, adding they began by actual sketching of the facades, photography and then the actual scanning on the machines.

“We wanted to hold these workshops because the ATHENA Project believes the staff and employees will benefit from knowing about the new technologies in the DoA to be used for restoration and cultural heritage,” says Al Adarbeh.
Although the participants were small in number, they include managers and administrators, curators, archaeological inspectors and lab technicians, carefully chosen across the board from these archaeological directorates some of whom cover many sites in their particular region which means they can tell the other managers and officers working in the field about these high-level equipments that can be used for conservation purposes.
“As professionals working in archaeological conservation and heritage, we need to know about new technologies to help us in our work,” said Khaled Al Zyout, conservation inspector in the Ajloun Archaeological Directorate which covers 220 sites in the north of the country and who attended the Amman Roman Theater training.
The Curator of the Saraya Museum in Irbid Alia Khasawneh is on-board as well. “From what I heard and practiced, these equipments seem to be very effective for conservation, and I am already wondering about the possibility of them being used to scan our museum since it is a very important Ottoman building,” she said.

The new laser technologies are already being practiced within the ATHENA collective. Al Safi and Al Hunaiti and Italians Luca Senatore and Chiara Capocefalo from Sapienza University completed the scanning of Carthage Theater and its amphitheater in late June/early July 2012 and the Jordanian team will be scanning the Cherchall and Tipaza Theaters in Algeria in mid-October.
The new technologies are part of the EU-funded ATHENA Project and is under the Euromed Heritage Program 4.

These new technologies provide for very effective ways for the preservation of heritage and culture in the Euromed region and goes to sustain these ancient theaters for many generations to come.