The Europeana Network Association AGM 2017 took place on 6 December in Milan, where it was possible for attendants to meet colleagues and peers to exchange professional knowledge and get inspired in a lovely museum surrounding in the run up … END_OF_DOCUMENT_TOKEN_TO_BE_REPLACED 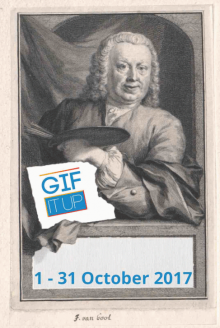 From 1-31 October, all GIF-makers, history nuts, cultural heritage enthusiasts and lovers of the internet are invited to take part in the fourth annual GIF IT UP competition.
Remix public domain artworks with GIF IT UP 2017 – the international competition for history nuts and culture lovers

The competition encourages people to create new, fun and unique artworks from digitized cultural heritage material. A GIF is an image, video or text that has been digitally manipulated to become animated. Throughout the month, they can create and submit … END_OF_DOCUMENT_TOKEN_TO_BE_REPLACED

The focus for this year’s grant proposals is intercultural dialogue in its broadest sense. Deadline is 20th October 2017
Europeana Research Grants Programme 2017: call for submissions and guidelines for applicants 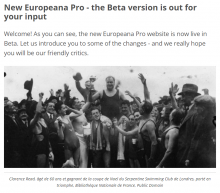 All Europeana’s professional services in one place, a redesigned website placing people first
New Europeana Pro: the Beta version is out for your input

In September 2017, the Europeana Pro website went throught a major redesign, also integrating Europeana Labs and Europeana Research, which were previously living on separate websites. One of the main reasons for this redesign was to place people first: the new … END_OF_DOCUMENT_TOKEN_TO_BE_REPLACED

There is an unprecedented amount of data on the Web today. However, this data is only as  useful as its quality allows it to be. Data Quality is an important topic in companies and organizations that use and/or disseminate large … END_OF_DOCUMENT_TOKEN_TO_BE_REPLACED

Enroll now and learn how to creatively reuse digital cultural content from professionals of the Europeana Space network.
“Creative with Digital Heritage” – E-Space MOOC is again accepting enrollments for October 2017

For the second academic year, the E-Space MOOC “Creative with Digital Heritage” is accepting enrollments. Europeana Space was a EC-funded project about the creative reuse of digital cultural heritage, which concluded in March 2017 with “excellent” evaluation from the EC … END_OF_DOCUMENT_TOKEN_TO_BE_REPLACED 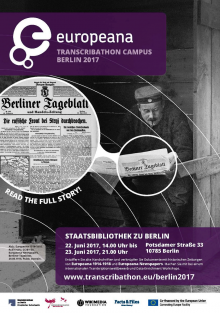 Officially launching the new Europeana 1914-1918 thematic collection, Europeana Transcribathon Campus Berlin 2017 marks the next milestone for the crowdsourcing digital archive dedicated to the historical conflict, and puts a spotlight on the involvement of its community. On 22 and … END_OF_DOCUMENT_TOKEN_TO_BE_REPLACED

One of the virtual interactive exhibitions about Belle Epoque, which are curated by KU Leuven and powered with the MuPop (the Pop-Up Museum tool developed in 2016 within E-Space project) was on show in Pisa on 20th May. On the … END_OF_DOCUMENT_TOKEN_TO_BE_REPLACED