The Library of Congress, the largest library in the World

based in Washington, it includes a digital section which boasts collections of extraordinary documents

The Library of Congress (LoC) is the national library of the United States of America. It holds more than 158 million documents and is therefore the largest library in the World.
Library of Congress was instituted on April 24, 1800, when John Adams’ presidency countersigned an act of Congress calling for the transfer of the government’s seat from Philadelphia to the new capital city of Washington. The law earmarked $ 5,000 “for the purchase of the books necessary for the needs of Congress […] and for the accommodation of an apartment suitable to contain them”. The first library was based in the new Capitol until August 1814, when the British troops burned down the old building, destroying the approximately 3,000 books preserved in there.

From the LoC website you can access a number of digital collections that include prints, drawing and photographs, music (such as 55 item of medieval liturgical chant manuscript), american folklife, motion picture, broadcasting and recorded sound, geography and map , rare book etc. 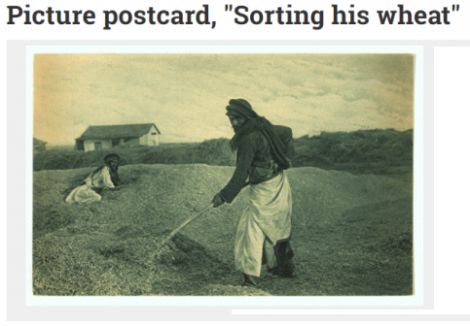 To give some examples, it is possible to consult digitally a collection of more than 1,800 photographs in 51 large-format albums date from about 1880 to 1830 referring the reign of the sultan Abdul-Hamid II, as also 361 audio recording of prominent Hispanic writers including Nobel Laureates Gabriel García Márquez, Juan Ramón Jiménez, Gabriela Mistral, Pablo Neruda, and Octavio Paz, and renowned writers Jorge Amado, Jorge Luis Borges etc.

A collection of American Colony in Jerusalem, 1870 to 2006, counts over 16,600 items stemming from the history of the American Colony, a non-denominational utopian Christian community founded by a small group of American expatriates in Ottoman Palestine in 1881. The collection, like we read in the presentation of the collection, focuses on the personal and business life of the colony from the waning years of the Ottoman Empire, through World War I and the British Mandate, and into the formation of the state of Israel. It includes draft manuscripts, letters, postcards, telegrams, diaries or journals, scrapbooks, printed materials, photographs, hand-drawn maps and ephemera. Most collection items are in English, but you can find also material in Arabic, Hebrew, Turkish, and Swedish. Items in the collection begin in 1786 and date to 2007. Documented are the colony’s business, educational, and philanthropic enterprises. American Colony member Bertha Vester’s diaries, written from home in Palestine and during trips to the United States between 1922 and her death in 1968, record personal life in the Vester family, internal politics of the American Colony, and first-hand views of Turkish, Arab, Jewish, and British colonial society and modern world events. 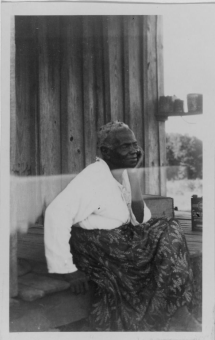 Another collection that I found truly extraordinary for my own personal interest is Born in Slavery: Slave Narratives from the Federal Writers’ Project, 1936-1938 . It contains more than 2,300 first-person accounts of slavery and 500 black-and-white photographs of former slaves. 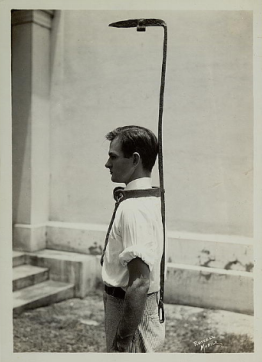 In the Notes about the photo here on the left we read: The bell rack. Contraption used by an Alabama slave owner to guard a runaway slave. This rack was originally topped by a bell which rang when the runaway attempted to leave the road and go through foliage or trees. It was attached around the neck as shown in the picture. A belt passed through the loop at the bottom to hold the iron rod firmly fastened to the waist of the wearer. In the accompanying photograph Richbourg Gailliard, assistant to the director of the Federal Museum and also a well-known young Mobile artist, poses to show the use made of the bell rack.

The World Digital Library, established in association with UNESCO and 181 partners in 81 countries in 2009, to make online copies of professionally curated primary materials of the world’s varied cultures freely available in multiple languages.

The library’s first digitization project was called “American Memory.” Launched in 1990, it initially planned to choose 160 million objects from its collection to make digitally available on laserdiscs and CDs that would be distributed to schools and libraries. After realizing that this plan would be too expensive and inefficient, and with the rise of the Internet, the library decided to instead make digitized material available over the Internet. By 1999 over 5 million objects have been digitizing. The idea to create an Internet-based, easily-accessible collection developed over the years and involved international partners thanks to Librarians of Congress.  Now the digital heritage of the LoC is an extraordinary source worldwide of public resources consulted by researchers and librarians.