The Berlin Wall, a multimedia history

A few days after the celebrations of the Berlin Wall fall, in the wake of a renewed interest in the events that characterized Europe and the World after the Second World War, I suggest above all to the youngest, who have to rely on the pages of the history books, the consultation of the portal  “The Berlin Wall – A multimedia history”.

As I have had the opportunity to write on other occasions, the internet allows access to a large number of documents that represent important testimonies of social life. In this case, the portal www.the-berlin-wall.com has facilitated the collection and use of scattered documents contained in the archives of radio (Radio Free Berlin) and GDR television. A timeline, that marks events year by year, gives anyone the chance to slide, following a single and unitary thread, 30 years of history that has not only concerned Germany, but the whole world.

The portal was created by Rundfunk Berlin-Brandeburg (rbb), the public service broadcaster for the states of Berlin and Brandenburg and part of the consortium of public broadcasters in Germany (ARD) which I myself had the opportunity to experience on my trip to Berlin last January.

The timeline, which from 1990 descends vertically to 1961, tells the life of the divided Berlin but also the tensions between East and West caused by Cold War in the 1960s.; Berliners from East and West talk about their personal experiences of living with the Wall: how they fled from East to West, how they were separated from their families, how they went about their day-to-day lives in the shadow of the Wall. 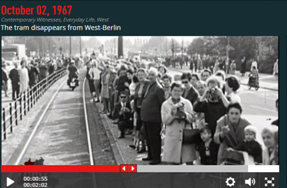 Contrary to what happens in West Berlin where the tram gives way to cars, in East Berlin the tram network is expanded. Hundreds of people are waiting for it.

The photographs in the article are all taken from the videos preserved in the archives of Radio Free Berlin (SFB)/rbb, the German Broadcasting Archive (DRA) and GDR television.

As the creators of the site write “two hundred and fifty films document life in the divided city from 1961 to 1989. Such a historical panorama would, of course, not be complete without taking a look at the fall of the Wall on November 9, 1989 and German reunification in 1990.”; they “interview escape helpers and follow the development of border fortifications as they grew higher and more impenetrable year by year”.

The first one shows Berlin in 1961, before the construction of the wall and the attempt to escape many people. “When radio mechanic Manfred Roseneit heard the Wall was going up on 13 August 1961 he set off on his motorbike and headed to the border to see if there was still a chance of getting across. Once he had found a spot to escape, he made a quick dash home to pick up his most important documents…”

At the end of October, American and Soviet tanks stand face-to-face at the US Checkpoint Charlie on Berlin Friedrichstrasse. 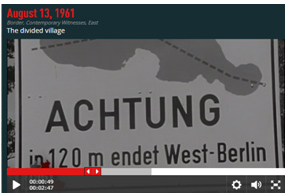 Map that represents the East-West border ran through the middle of Lake Glienicke.

Another video shows the facts happened at the end of October 1961 when  American and Soviet  tanks stand face-to-face at the US Checkpoint Charlie on Berlin Friedrichstrasse and the GDR authorities are trying to restrict the allies’ freedom of movement. The East-West border ran through the middle of Lake Glienicke. From 1961 the border was fortified, meaning that bathing was only allowed on the Western side. This film explores how the residents of Groß Glienicke dealt with the situation and tried to make contact with villagers on the other side.

It is interesting  to discover how Luis Armstrong invited to East Berlin for a jazz concert gave in an interview the statement of not being interested in the wall but in the audience for his concert. Not only Armstrong brings music to East Berlin: in May 1978 it is the turn of the Queen and their spectacular concert in the Deutschlandhalle arena. 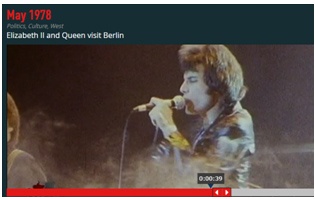 A moment of the spectacular concert in the Deutschlandhalle arena, shows the young Freddie Mercury

We can find clips showing the arrival of the tram, the opening of the hotel Metropol, the visit of Queen Elizabeth II, that of Ronald Regan and first lady in 1982, interviews and speeches from well-known dissidents, the conviction of authors accused of “defaming the GDR, the SED, its cultural policy and its legal system”, and of having “put themselves at the service of anti-communist forces working against the GDR”. 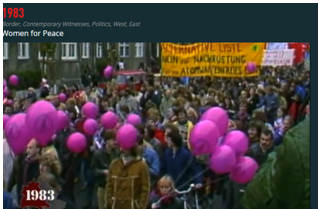 Meantime, in 1983 many people on both sides of the city are campaigning for peace and disarmament. Women’s groups from East and West join forces and name themselves Women for Peace. Eva Quistorp, founder of Women for Peace in the West, talks about making contact with women on the other side of the Wall. It wasn’t an easy task because the Stasi pursued and spied on the women in the East.  A lot of women from the peace movement in the East later became part of the autumn events that lead up to the fall of the Wall.

When in 1988 Pink Floyd were playing outside the Reichstag building in West Berlin, on the other side of the Wall hundreds of fans gather  in the hope of hearing some of the concert. But things take a turn for the worse and the East Berlin authorities make a number of arrests.

And here we are on 9 November 1989: during an international press conference Günter Schabowski, a member of the politburo, announces that the GDR will be opening its borders. An Italian journalist, Riccardo Ehrman, asks about changes to the laws governing the right to travel. Schabowski answers: “We have therefore decided today to put in place a regulation that allows every citizen of the German Democratic Republic to leave through any of its border crossings.” Ehrman: “When does it come into effect?”
Schabowski: “That comes into effect, according to my information… immediately, without delay.”
Schabowski continues: “Permanent exit can take place via all border crossing points between the GDR and FRG or West Berlin.”

The wall is dead.

The website is optimised for mobile devices. Visiting Berlin we can use the digital map to visit the sites featured in the archive footage and travel back in time to learn about the event at the place it happened.