There is a history of migration involving a large number of Britain’s children who were “shipped” since the 1860s to Canada, Australia and other Commonwealth countries. This fate affected over 100,000 children. I knew the living conditions of English children at the time of industrialization and their exploitation in work in the new factories, but I didn’t know this sad page of history that is well remembered and described in an online exhibition presented by the Australian National Maritime Museum in Sydney, titled “Britain’s child migrants”.

You may wonder why this forced migration. We can read the reasons in the page that introduces the exhibition: “Few were orphans; many came from families who were unable to care for them. With the belief that the lives of these children would improve, charitable and religious organisations sent them overseas. They were supported by governments for which these schemes supplied much needed population and labour”.

The forced migration lasted for almost a century and it is not difficult to understand how for these children the separation from their families was dramatic. “Child migration schemes – as we continue to read in the introduction- received criticism from the outset yet continued until the 1960s. Formal apologies from the Australian Government in 2009 and British Government in 2010 were made but many former child migrants and their families are still coming to terms with their experiences”.

The on line exhibition is organized in six sections: The Departure, Empire and Dominions, The Voyage, New Lands, New Life, Reflection, remembering and reunion, Resources. Each section is presented by one or few images and short texts. It is possible within the individual sections to access subsections through which you can deepen some topics. 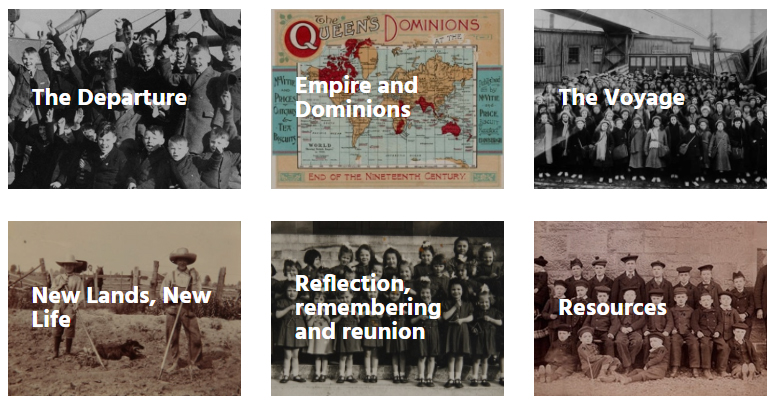 This screenshot shows the main sections of the “Britain’s child migrants” on line exhibition; https://www.sea.museum/discover/online-exhibitions/britains-child-migrants

The photographs show the children with their suitcases – often the only luggage they brought with them, along with the feeling of separation. Of some children there are “study sheets”, if we can use this term, in which you can find information about the age they had when they were made migrants, where they came from and what was their destination. And again, thanks to the exhibition you can know the shipping companies and also the name of the ships that were generally used for these forced voyages. The exhibition includes examples of letters sent by child migrants where they describe some of the places they visited and their experiences during their long voyage to Australia.

The Resources section provides links to various other sites for both families who have been affected by child migration, and researchers interested in finding out more about this subject.

The exhibition was made possible thanks to the collaboration between the Australian National Maritime Museum and National Museums Liverpool, Liverpool, UK and is supported by the National Collecting Institutions Touring and Outreach Program, an Australian Government program that aims to improve access to the national collections for all Australians.