take a tour of ancient Rome in A.D. 320 and discover the architecture of the eternal city as Emperor Constantine saw it.

Rome Reborn Project was an international initiative launched in 1996 with the goal of creating 3D digital models to illustrate the urban development of ancient Rome. According to the advice of the project’s advisory committee, the work of modeling begun recreating the city in year 320, under the emperor Constantine. This was a transition moment for the ancient city from the point of view of its architecture, which saw an increasing of Christian basilicas and churches built near to older structures such as the Pantheon and the Roman Senate House, thus enticing a great change in the urban landscape in that moment. The model shows a very neat panorama, which doesn’t account the recreation of the actual conditions of traffic, dirt and confusion of antique Rome’s crowded streets; but permits to explore over 7,000 buildings and monuments as they are known through literature, maps, and catalogues.

Rome Reborn–Flight over Ancient Rome from Bernard Frischer on Vimeo.

What was a digital humanities project at the University of California at Los Angeles, where architectural historians and 3D modelers were involved into its early development and then launch, grew along time well beyond the project itself and various versions of Rome Reborn have been developed by artists, classicists, archaeologists, and 3D modelers at numerous institution, whom have not always been cited and credited for their work. Although some criticism arised along time, due to the fact that a project originally funded by public money was eventually the base for highly commercial products copyrighted by an ad-hoc created, for-profit company, the new app Rome Reborn® VR nowadays utilizes version 3.0 of the 3D digital model as originally created and makes the model publicly available using Virtual Reality headsets and personal computers (Windows and Mac), for new experiences of education and entertainment: users can immerse in the ancient city, walking down its streets and entering some of its most famous buildings while listening to the commentary of highly qualified experts.

Whether such cultural heritage content should be more available to the public in an open-access repository is still an open question; in any case the project is indeed one of the best examples in the field of digital cultural heritage and 3D interactions with the past. 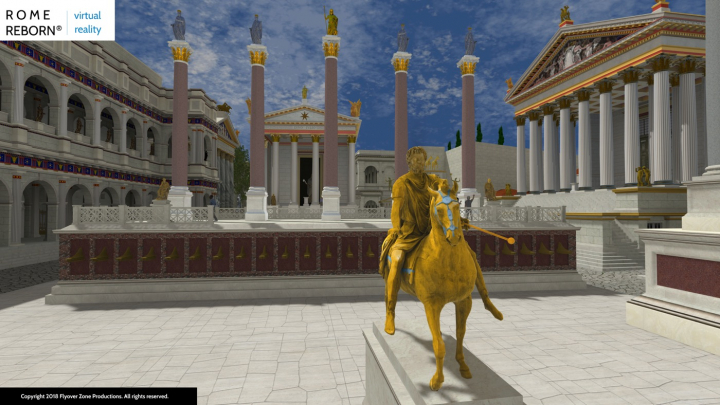