History of the Indian Tribes of North America, an extraordinary historical heritage 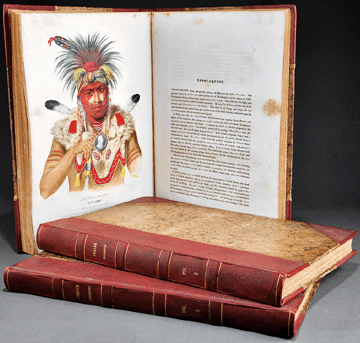 “History of the Indian Tribes of North America” is a three-volume collection of Native American biographies and portraits originally published in the United States from 1838 to 1844, by Thomas McKenney and James Hall. McKenney served as Commissioner for Indian Affairs from 1824 to 1830 and during this time he commissioned and collected portraits of Native Americans for his gallery, in the War Department.

The Bureau of Indian Affairs was created on March 11, 1824 without authorization from the Congress. McKenney, formerly superintendent of Indian trade, was appointed to head the office, with two assistants. “McKenney was instructed to take charge of the appropriations for annuities and current expenses, to examine and approve all vouchers for expenditures, to administer the funds for the civilization of the Indians, to decide on claims arising between Indians and whites under the intercourse act, and to handle the ordinary Indian correspondence of the War Department”, it is explained in a blog about the history of the Bureau published in the journal of the American Studies Resources Centre at Liverpool John Moores University. 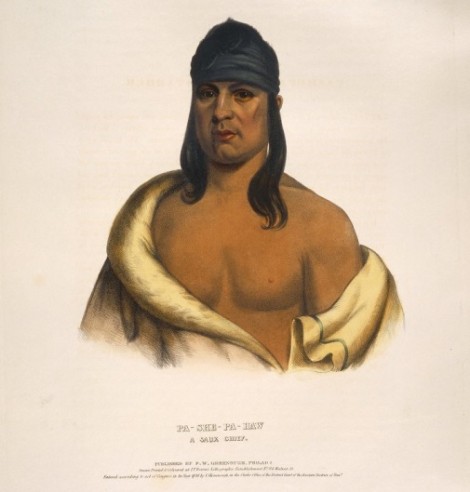 During his duties, the Superintendent of Indian Affairs understood that the future of Native American was at risk, as a consequence of unscrupulous individuals taking advantage of the Native Americans for profit. His many journeys to deal with the Chippewa or Menominee, to define mining rights on their land, allowed him to know the culture of these Indian tribes, and possibly for this reason McKenney decided to publish a record of such vanishing peoples: portraits, biographical sketches, anecdotes and a history of North American Indians. The book was enriched with the portraits he had commissioned.

The oil portraits of Indian leaders, realized on the occasion of their visits to Washington for negotiating treaties with the American government, were made by Charles Bird King and other American painters, while the texts were written by James Hall. 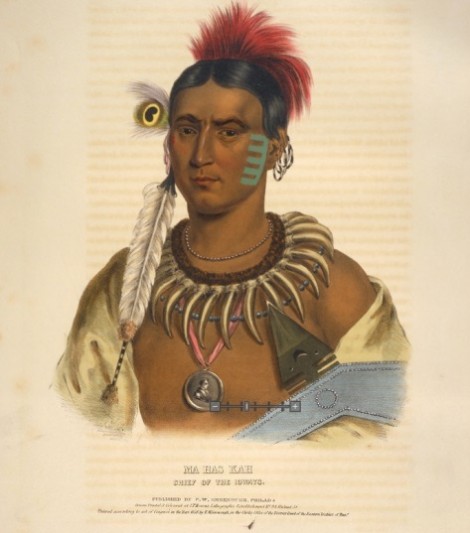 Ma has kah, chief of the Ioways

Unfortunately, most of the original paintings were destroyed in a fire after the Civil War, so the few remaining copies of this ancient book, containing the lithographies from those paintings, are the only resource left to preserve such an important heritage. But once again digital technology comes to help: in the Digital Collections of the University of Cincinnati we can access the digitized images, each with a wide description of the location, measurements, material, repository, description etc. and the images can be downloaded.

The images were digitized from a copy of the edition held in the Archives & Rare Books Library of the University.

Access the digital collection: http://digital.libraries.uc.edu/luna/servlet/univcincin~24~24
Blog about the history of the Bureau of Indian Affairs: http://www.americansc.org.uk/Online/indians.htm