Madrid hosted the Europeana AGM 2014, in the wonderful premises of the Museo del Prado, with the support of the Ministerio de Educación, Cultura y Deporte, on 30-31 October. Europeana Photography could not miss this event, to disseminate and describe the experience of the partners who embarked on the journey to digitize over 400.000 early photographs for Europeana: at that time, only few of them had realized that their very concept of the photograph would change forever.

In the AGM 2014, Europeana Photography was presented  by the project coordinator Fred Truyen (KU Leuven) during an Ignite Talk on the morning of 31st October.

The title of the talk was “All our memories: sharing photographic heritage through Europeana”. 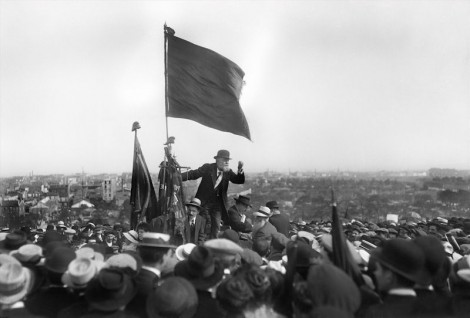 While sifting through often unseen and unpublished photos from Europe’s top collections, a fascination grew among the collaborators of the involved musea, archives and photo-agencies for what was captured on these dusty glass negatives, daguerreotype plates and albumen prints ranging from 1839 to 1939.

What was there was not only revealed through the digitization, but urrevocably reframed into an new visual experience. Questions about the very nature of what in the end the elusive “photo as object” is, and its ramifications for archival practices, became unavoidable.

Moreover, looking through the lenses of old photographers who were priviliged wittnesses of Europe’s history, big reflections came out about different aspects from a Digital Humanities perspective and on the transformational role of Europeana.