Enslaved Africans across the Atlantic world

We already mentioned in the past about the theme of the slave trade heritage digitization  projects, that is a topic of extensive research especially for American Institutions. One of these projects developed the site www.slavevoyages.org, that is a database built in three years of development by a multi-disciplinary team. 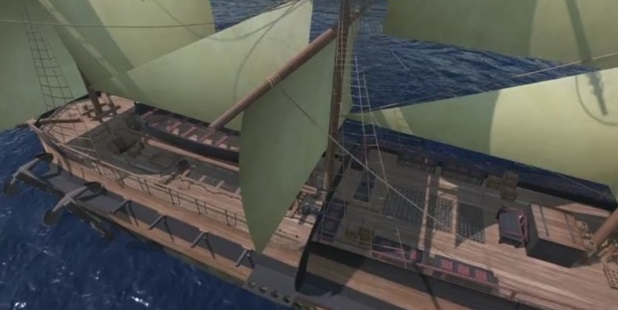 I was personally very impressed with the project description: “This digital memorial raises questions about the largest slave trades in history and offers access to the documentation available to answer them. European colonizers turned to Africa for enslaved laborers to build the cities and extract the resources of the Americas. They forced millions of mostly unnamed Africans across the Atlantic to the Americas, and from one part of the Americas to another. Analyze these slave trades and view interactive maps, timelines, and animations to see the dispersal in action”. 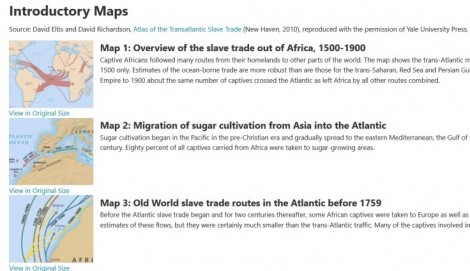 You can immediately notice that the home page has a very captivating design and the graphic reflects the theme treated, starting from the strong contrast between the black background containing in transparency an image of a slave ship and the white of the caption. Through this page we have access to a large amount of resources such as maps, 3D video, timeline.

The section titled “Introductory Maps” permits to be aware of the slave trade since 1500. These maps show us not only the slavery trade routes in the Atlantic, but also the number of the slaves from Africa and Asia to America and Intra-America slave trade. We can have an idea of how  ships were, viewing a 3D Video reconstruction of the slave vessel L’Aurore. A particular timeline shows the number of captives embarked and disembarked per year and it permits to understand the number of people who died along the voyages. 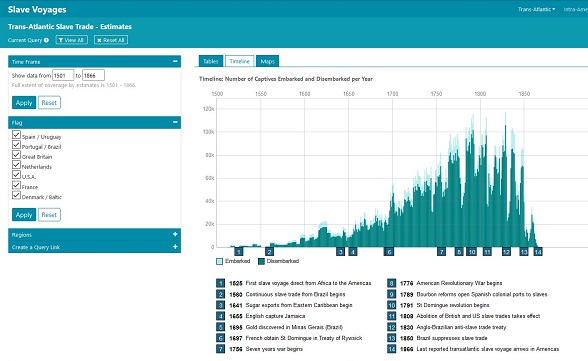