Discovery of the place where Van Gogh painted his last masterpiece

thanks to a heritage postcard, a great cultural heritage research story and discovery 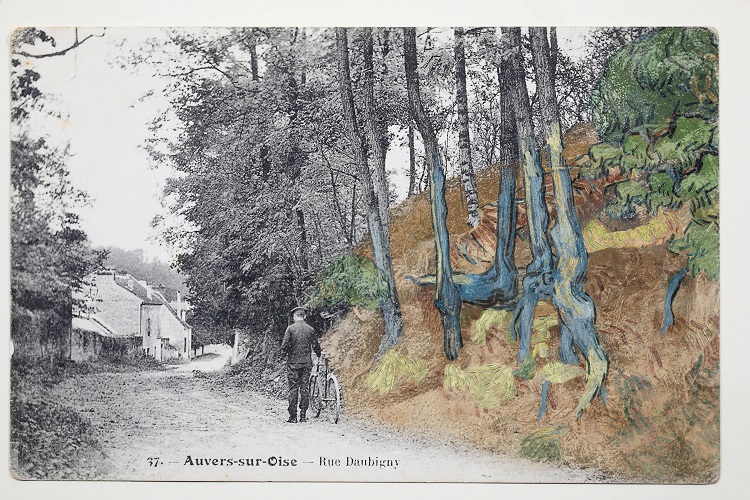 The discovery of the exact location where Vincent van Gogh painted his last artwork Tree Roots was made by Wouter van der Veen, the scientific director of the Institut van Gogh (Auvers-sur-Oise). Van der Veen found a post card dating from 1900 to 1910 featuring a scene including tree trunks and roots growing on a hillside. He has described and documented his discovery in a book, Attacked at the Roots, written specially for the occasion. Tree Roots is in the collection of the Van Gogh Museum in Amsterdam.

Highly plausible discovery
Van der Veen submitted his discovery to Louis van Tilborgh and Teio Meedendorp, senior researchers at the Van Gogh Museum, almost immediately. Bert Maes, a dendrologist specialising in historical vegetation, was also consulted. Based on Van Gogh’s working habits and the comparative study of the painting, post card and current condition of the hillside, the experts concluded that it is ‘highly plausible’ that the correct location has been identified.

Wouter van der Veen (scientific director of the Institut van Gogh):
‘Every element of this mysterious painting can be explained by observation of the post card and the location: the shape of the hillside, the roots, their relation to each other, the composition of the earth and the presence of a steep limestone face. The site is also consistent with Van Gogh’s habit of painting motifs from his immediate surroundings. The sunlight painted by Van Gogh indicates that the last brush strokes were painted towards the end of the afternoon, which provides more information about the course of this dramatic day ending in his suicide.’

Teio Meedendorp (senior researcher at the Van Gogh Museum):
‘In our opinion, the location identified by Van der Veen is highly likely to be the correct one and it is a remarkable discovery. On closer observation, the overgrowth on the post card shows very clear similarities to the shape of the roots on Van Gogh’s painting. That this is his last artwork renders it all the more exceptional, and even dramatic. This area had already been documented by Van Gogh in other paintings. He must often have passed by the location when going to the fields stretching out behind the castle of Auvers, where he painted several times during the last week of his life and where he would take his own life.’ 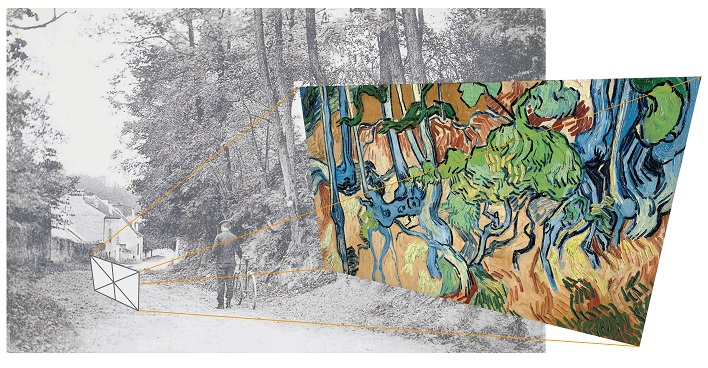 A moving experience
In May 2020, once the Covid-19 lockdown in France was lifted, Wouter van der Veen was able to travel to the site to verify his theory several months after the initial discovery. The site is 150 meters from the Auberge Ravoux, the inn in Auvers-sur-Oise where Van Gogh stayed the last 70 days of his life. Spectacularly, the biggest tree trunk from the painter’s last motif is still present and recognisable.

The Institut van Gogh, in co-operation with the local authorities, has erected a protective wooden structure to safeguard the site and allow for visits by the public. From today, those who visit Auvers to follow in the footsteps of Van Gogh will add another moving experience to their journey: they can stand at the exact place where Van Gogh’s paint brush last touched the canvas. 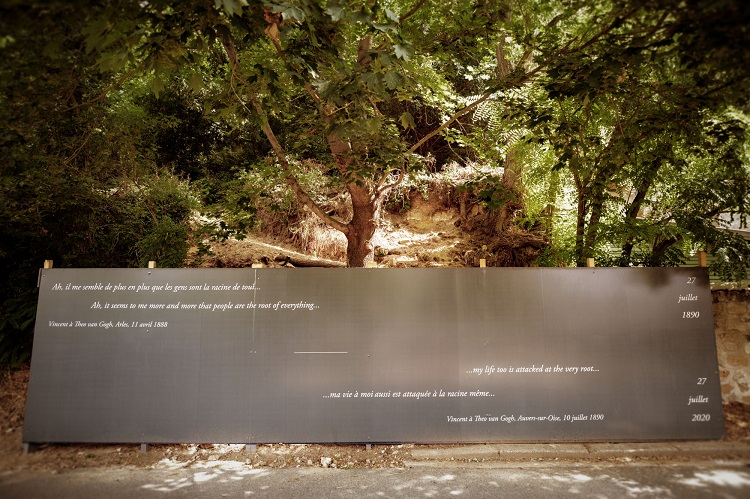 The condition of the hillside in Auvers-sur-Oise in June 2020, ©arthénon