The Met’s Heilbrunn Timeline of Art History accompanies the virtual travellers in the history of art, millennia before Christ 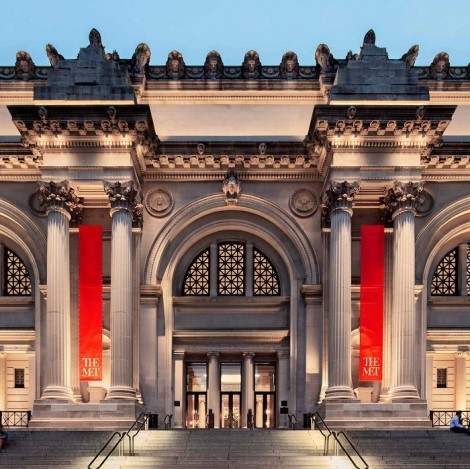 Dear readers, I once again speak about New York and in particular about the Met, the Metropolitan Museum of Art, which digitized a large number of historical documents in the last two years and made them available to the “World” via their website.  The Museum has three sites in New York City: The Met Fifth Avenue, The Met Breuer, and The Met Cloisters.

Those who browse the Mets’s website, millions of visitors, immediately understand what its mission is:

The Metropolitan Museum of Art collects, studies, conserves, and presents significant works of art across all times and cultures, in order to connect people to creativity, knowledge, and ideas.

I will go into further articles on the history of the Met, as well as the various collections on line. Today I would like suggesting the virtual navigation along The Met’s Heilbrunn Timeline of Art History founded by the Heilbrunn Foundation, New Tamarind Foundation, and Zodiac Fund, that tells the story of art and global culture.

Navigation is made easy by the fact that you can select the period (from 8000 B.C), the geographical area or theme. Take Mesopotamia as an example: A universally accepted chronology for the entire ancient Near East remains to be established.

[…] By 8000 B.C., agricultural communities are already established in northern Mesopotamia, the eastern end of the Fertile Crescent. Early in the sixth millennium B.C., farming communities, relying on irrigation rather than rainfall, settle ever further south along the Tigris and Euphrates rivers.

I suggest some virtual paths that you can follow along the timeline: the section Key Events describes historical facts in chronological order; Related correlates facts and events; Work of Arts shows archaeological finds of extraordinary beauty. We can study the East, the Middle East, some African countries, Central Europe, America, Oceania.

Take for example the Roman Empire in the period from 1 to 500 a. C. in the Italian Peninsula: after the presentation of the historical period you can browse the images of archaeological finds, each of which presents a detailed description. The section Key events describes historical events in chronological order: the first commented date is 14 A.D. : Augustus dies and his stepson Tiberius (r. 14–37 A.D.) is left master of the Roman empire. His assumption of power is the first step toward introducing the principle of dynastic succession in the empire.  One of the last,  476 A.D.: The German Odovacer deposes Romulus Augustulus, the last Roman emperor in the West, and becomes the first barbarian king of Italy. 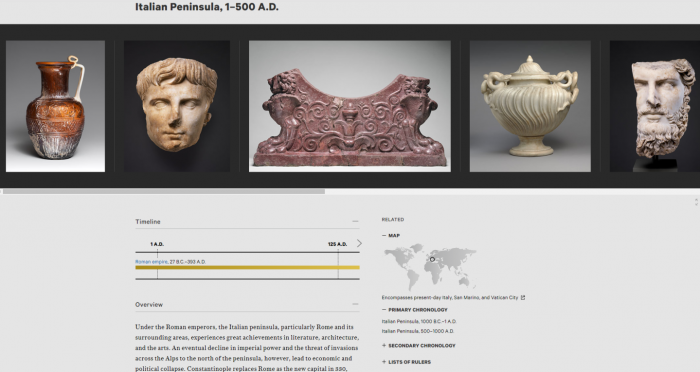 As I said the Related section, correlates through keywords the events, in this case of the Italian peninsula, with other events of the neighboring countries.  In subsequent articles I would like to describe Asian art, especially that of the Batak ethnic group, but also the extraordinary history of Chinese calligraphy and much more.

It is not difficult to imagine how such and numerous documents can be used in the field of education and the possibilities that students could have, not only to carry out interactive research but to understand the richness of the different cultures.