Towards a new social contract between publishers and editors 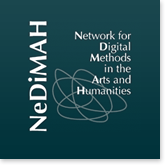 NeDiMAH, the Network for Digital Methods in the Arts and Humanities, is delighted to announce this one-day seminar, which will bring together publishers and scholarly editors in order to discuss how best to produce digital editions which are at the same time both economically viable and in keeping with scholarly standards.

In the pre-digital world, publishers and editors normally collaborated: the editors would produce the edition, following the guidelines provided by the publishing house, which for its part would take care of marketing and distribution, as well as essential scholarly services such as peer review.

Digital scholarly editions, on the other hand, tend to be self-published by scholars within their own universities, most often without any connection with a publishing house – an arrangement which is hardly sustainable, for various reasons, and often not available to younger researchers producing their first editions and without access to suitable funding. At the same time, publishers are increasingly engaging with the digital, in particular in connection with tablet distribution. But the majority of such eBooks are generally not up to the standards expected by the scholarly community: in many ePubs, for instance, basic features such as footnotes are a luxury – to say nothing of a proper critical apparatus.

How can be we best address these issues, to the mutual benefit of all involved parties – editors, publishers and the scholarly public?

If you are interested in participating, please send an email to Andrea Penso: andrea.penso@u-grenoble3.fr
Registration is free of charge but obligatory (deadline 16 January 2015).