4th Council of Europe Platform Exchange on Culture and Digitisation

The 4th Platform Exchange on Culture and Digitisation, being organised by the Council of Europe in cooperation with ZKM at the ZKM headquarters in Karlsruhe, from 19-20 October, will try to reveal the underexploited potential of Culture, Arts and Science as a strong resource for empowering democracy for culturally competent citizens. Its overall aim will be to raise member States’ awareness of the role of Culture, Arts and Science in addressing populism, fake news, xenophobia and undemocratic ideological political movements in Europe. In so doing, it will focus on various digital cultural tools used by artists, cultural practitioners and scientists to deal with current developments. It will highlight the power of European cultural, arts, technological and scientific connections that have grown over the past centuries and are an infinite resource, outliving undemocratic political or ideological movements. 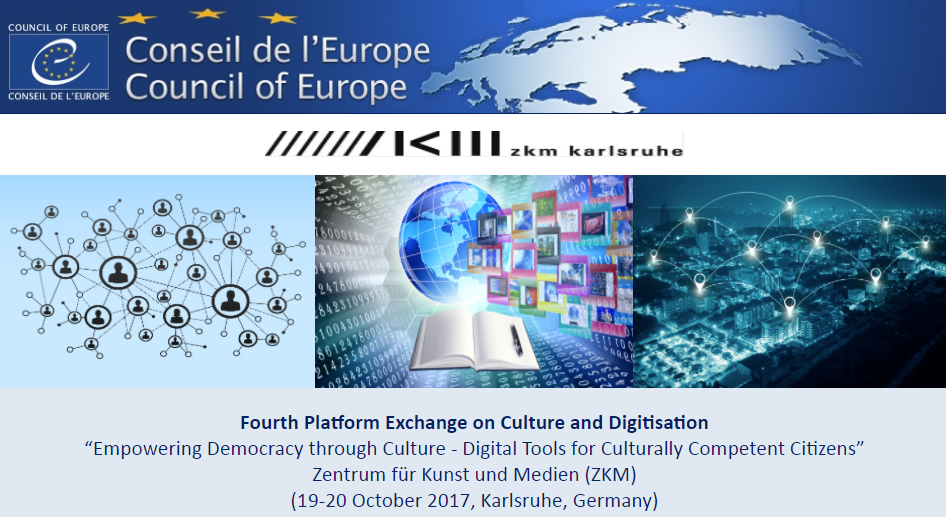 The rise of ideological political movements and the success of populist parties in Europe are challenging the resilience of democracy. In many parts of the world, Europe remains a beacon of democratic progress. However, recently many societies seem to be less protective of their pluralistic and democratic values and more accepting of populism and its anti-establishment political forces which offer simple solutions to complex problems, invoke the proclaimed “will” of “the people” and the moral authority therefore to stifle opposition, to take over state institutions and, when it suits, to bypass existing democratic constraints. Populists’ battery of machinery includes “fake news”, constant references to xenophobia and their ability to exploit public anxieties over migration.

While populism seeks to exclude the diversity of voices and thus damages democracy, Culture, Arts and the Sciences on the other hand have been instrumental in conserving and transmitting democracy’s ethos and the spirit of democratic values. In this respect, digitisation plays an innovative role in the spreading of democratic messages conveyed by cultural and artistic tools. Digitisation creates a unique virtual public space that empowers individuals to produce and distribute their work unimpeded by gatekeepers.