Anthropocene, a multimedia exhibition that investigates the impact of human footprint on the Earth

Welcome to MAST Foundation (Arts, Experience and Technology), an international cultural and philanthropic institution that focuses on art, technology and innovation.

Welcome to Anthropocene, a multimedia exploration of the human footprint on Earth. For the first time in Europe an exhibition investigating the impact of man on our planet. 7 months of extension brought thousands of visitors to MAST. Anthropocene is an artistic, technological and human experience. 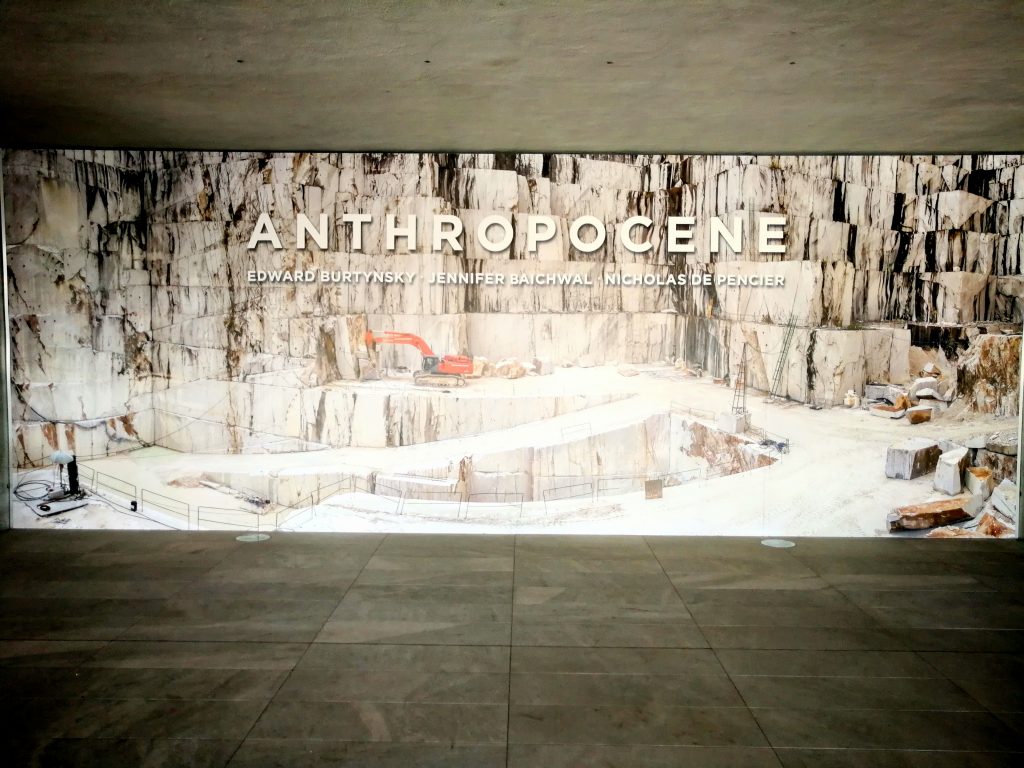 The photo at the entrance of the exhibition shows the work in the marble quarries of Carrara (ph. F. Sbrana)

My first impression was to feel good. I felt like I was in a comfort zone and reason cannot be constituted by the dramatic photographs displayed, but by finding me among people with the same desire to know what Anthropocene Era represents. Each of those present was aware of the disasters that man is creating with his own hands, through urbanization, industrialization, mining, oceans acidification, climate change. The second impression has been an assessment on the involvement that interactive exhibitions have on visitors. 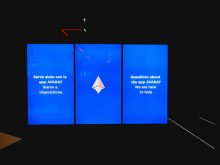 Symbol of the app AVARA

I felt, in the silence, in the words pronounced in a whisper, a concentration of emotions that the images, realized also through a sophisticated technology, determined on the visitors. I first downloaded for free on the Google Play the app AVARA on my smartphone and I began visiting the four sections of the exhibition. 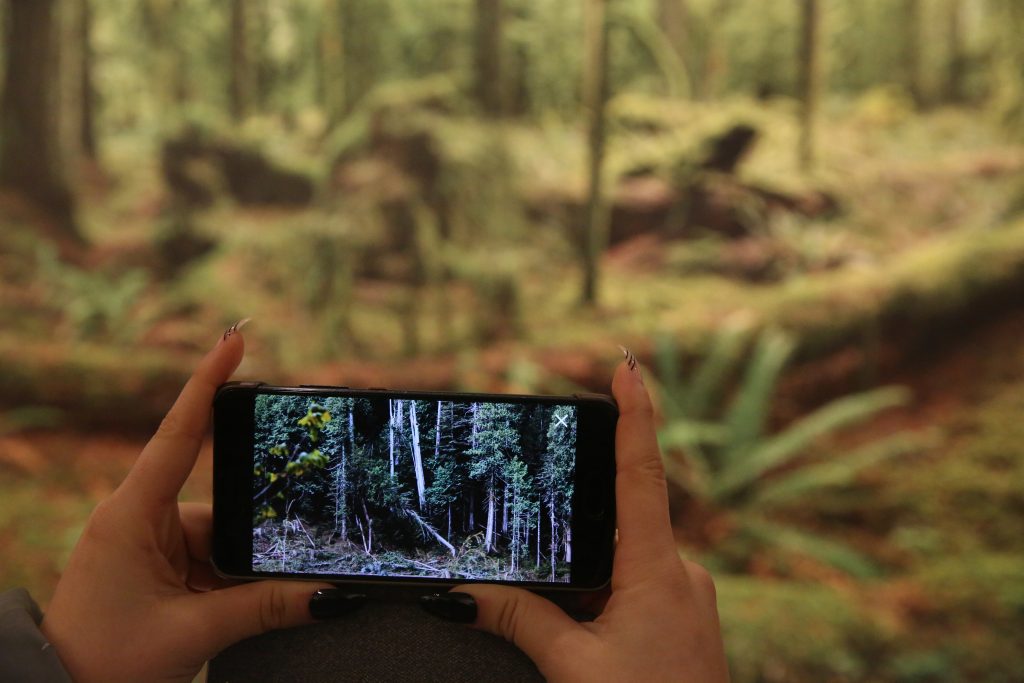 Thanks to the app AVARA you can activate the film showing the felling of dangerous trees, in Cathedral Grove forest, in Canada (ph. F. Sbrana)

Edward Burtynsky is the author of the 39 photographs in exposition; Jennifer Baichwal and Nicholas de Pencier of the films and immersive augmented reality installations. 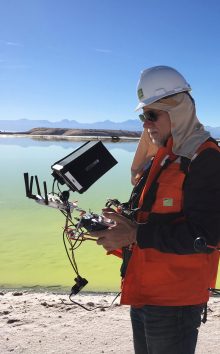 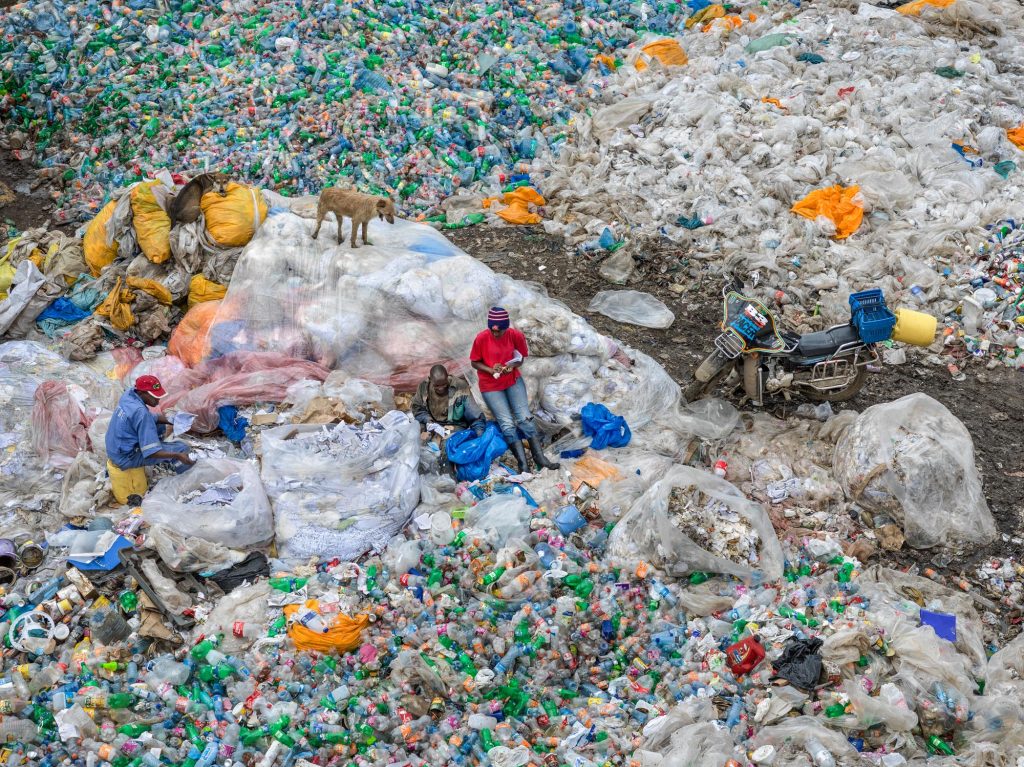 The films prepared by Jennifer Baichwal and Nicholas de Pencier  show the Gottard Base Tunnel in Switzerland, mega train transport of coal in Wyoming, USA; felling and explosion of dangerous trees in Cathedral Grove forest on Vancouver Island, Canada; the scale of industry in the mining town of Norilsk, Russia etc..

Three HD film installations provide a detailed illustration of a phosphate mine in Florida, a Texas oil refinery and the Great Barrier Reef in Australia which has been subjected to severe coral bleaching. A high-resolution mural strikes me: the extraction process in the marble quarries of Carrara. My maternal grandfather was a “cavatore” (person working in marble quarries). I have seen marble quarries since I was little. Today part of the mountain is no longer there.

Another heartbreaking image is represented by the historic bonfire ordered by President Kenyatta, in Kenya, to burn the stacks of ivory tusks confiscated from poachers in 2016. 105 tonnes of ivory burned to stop illegal trafficking and killing elephants and rhinos. The video of the numerous piles of elephant tusks going up in smoke is something that cannot be forgotten.

Completing the exhibition is the documentary film Anthropocene: The Human Epoch, co-directed by the three artists and narrated by Academy Award-winning actress Alicia Vikander. I can only say that it was an unforgettable experience.

The project debuted in Canada, in September 2018 with the film Anthropocene: The Human Epoch. On September 28, 2018, the Art Gallery of Ontario (AGO) in Toronto and the National Gallery of Canada (NGC) in Ottawa presented simultaneous, complementary exhibitions of Anthropocene, in conjunction with Fondazione MAST, in Bologna, where the exhibition has been presented in the spring of 2019 for its European premiere. 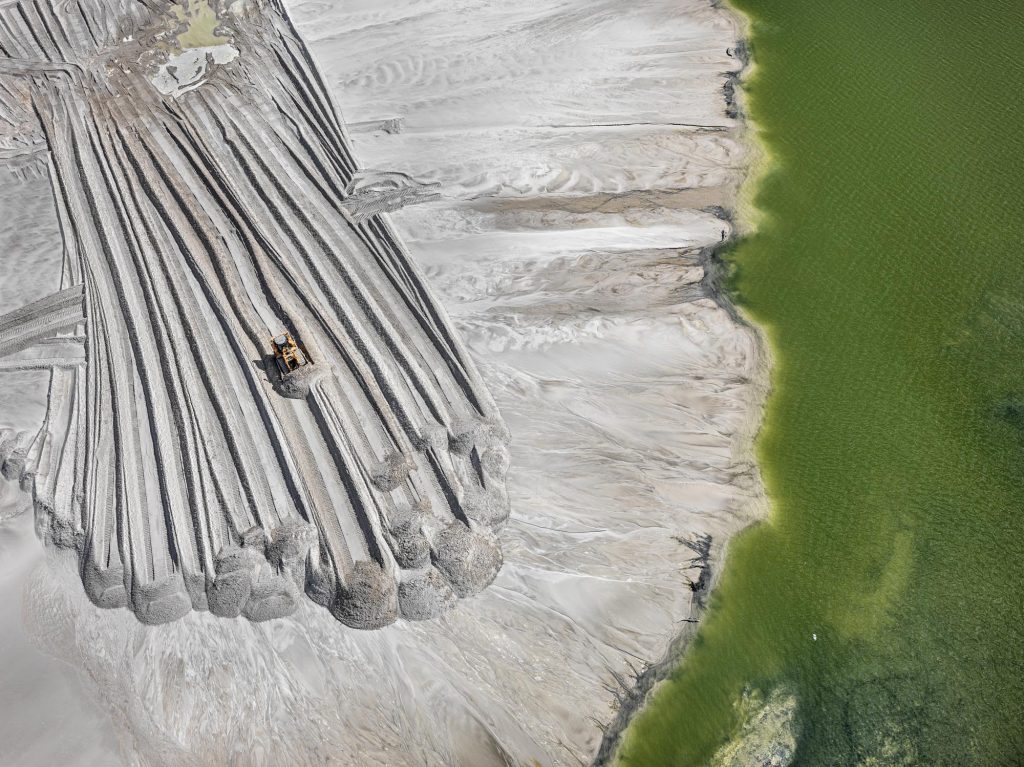 As I wrote above, the exhibition, which explores the effects of human activity on the planet, forms part of the artistic project of the Fondazione MAST, which, since 2013, has been investigating and reflecting upon the relationship between humankind and work through photo exhibition.

We thank the Fondazione MAST, in Bologna, for all information and photographic materials made available to us.