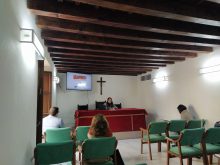 title of the presentation was 'INCULTUM Project: sustainable cultural tourism based on historical irrigation systems in the Altiplano of Granada'
Presenting INCULTUM in international congress Habitat Excavado

image courtesy of Elena Correa Jiménez. The Geopark of Granada hosted the Congress «Excavated Habitat and Cultural Landscape: International Colloquium Culture of Deserts», which took place in March 2022, with the organization of the University of Granada and the associations … END_OF_DOCUMENT_TOKEN_TO_BE_REPLACED

A new museum exhibition opened in the city of Përmet, Pilot area of the Upper Vjosa valley, Albania.
Unveiling a new archaeological collection previously unavailable to the public

text and images by Egla Serjani, CeRPHAAL During end of March and early April, CeRPHAAL team was involved in preparing a museum exhibit of archaeological artefacts found within the territory of the Upper Vjosa valley, Albania. This activity was supported … END_OF_DOCUMENT_TOKEN_TO_BE_REPLACED 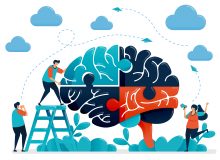 INCULTUM was invited to take part in a discussion about synergies and future collaboration with sister projects funded by EU.
Coordination meeting among projects on sustainable cultural tourism

Initiated by IMPACTOUR project coordinator prof. João Martins from the Electrical and Computer Engineering Department at the NOVA School of Science and Technology in Lisbon, a very productive and friendly meeting took place on 11th March between the representatives of … END_OF_DOCUMENT_TOKEN_TO_BE_REPLACED

the congress, whose main theme is water, takes place at the University of Algarve, in May 2022
INCULTUM Pilot in Portugal co-organizes the 10th Congress on Rural Studies

How does water, waters – groundwater, rainwater, river, marine – condition or conditioned agriculture and rural society? What strategies and what processes of cooperation or conflict have occurred in the access and use of water? What economic uses have been … END_OF_DOCUMENT_TOKEN_TO_BE_REPLACED

INCULTUM and SPOT projects are both focused on the research and study of problems related to cultural tourism, seeking for stakeholders’ and communities’ involvement and developing information to help policy and decision-making. The EU-funded SPOT project aims to develop a … END_OF_DOCUMENT_TOKEN_TO_BE_REPLACED 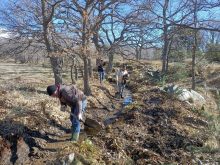 text and images courtesy of Elena Correa Jiménez (University of Granada). Following the work for recovering the area that was initiated on Pilot site in January and February, on the 5th of March another fieldwork activity was done in the … END_OF_DOCUMENT_TOKEN_TO_BE_REPLACED

The Webpresence of INCULTUM project is now enriched with the opening of the INCULTUM YouTube channel. The channel, coordinated by partner Promoter s.r.l. the responsible for INCULTUM communication and dissemination, opens with the recordings of the recent Data Workshop, INCULTUM’s … END_OF_DOCUMENT_TOKEN_TO_BE_REPLACED

text and images courtesy of University of Algarve. The Portuguese pilot of INCULTUM over the Campina de Faro (Algarve), launched a challenge to professors and students of Architecture at the University of Seville. As part of the Taller de Arquitectura … END_OF_DOCUMENT_TOKEN_TO_BE_REPLACED

INCULTUM and RURITAGE projects have in common a keen focus on empowering marginal and rural areas in the promotion of their cultural and natural heritage, which not only needs to be safeguarded but also leveraged for communities-driven sustainable development. The … END_OF_DOCUMENT_TOKEN_TO_BE_REPLACED

text and images courtesy of Elena Correa Jiménez (University of Granada). Following the work for recovering the area that was initiated on Pilot site in January, the students of the Rural Public School “SENED” of Jérez del Marquesado were involved … END_OF_DOCUMENT_TOKEN_TO_BE_REPLACED