“UBIQUE”, a theatre and new technologies play as the outcome of an artistical technological residency

Different artistic languages and digital tools are connected and explored during the residency, for a greater audience involvement at the final performance 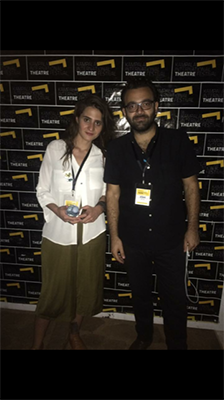 Minwal Theater Company is a Lebanese theatre company awarded last year at the third edition of Le Meraviglie Del Possibile, LMDP International Theater art and new technologies’ Festival, with their work BARZAKH | Isthmus, in December 2016.
Jad Hakawati and Roaa Bzeih, theatre makers and artists members of Minwal Theatre Company, come back in Italy for and artistic and technological residence called “A.R.T.E. Augmented Reality Theater Experience”. This kind of residency began already last December during the 4th edition of LMDP Festival with the performance “MAP E.T” of the French multimedia artist VEIA. The transdisciplinary and transmedial project is produced by Kyber Teatro about augmented reality in the theater and it won the second prize of “ScrabbleLab” competition announcement promoted by Sardinian Region.

Through the mobility and the creative exchange of artists from different European and not European countries (V.E.IA from France and Minwal from Lebanon), digital creative artists from Sardinia and immigrants as well, during the residence we present on the stage several contemporary issues and subjects. The residence focuses in particulary on the concept of ubiquity “real” and virtual: the conquest of the right for ubiquity as a new human right, a hot topic in these times marked by inalienable physical and human boundaries. Different artistic languages and digital tools are connected, for a greater audience involvement.

On Friday 15 and Saturday 16 of June at 9.00 pm in Cagliari, SPAZIO OSC Via Newton 12, the final performance outcome of the residency opens to the public: “UBIQUE”, a theatre and new technologies play producted by Kyber Teatro and Minwal Company.