Genius Loci Weimar is an annual audiovisual art festival, video mapping and façade projections held in August. It is preceded by a competition, and the winner works will be showcased at the festival. In addition to videomappers, videographers and motion designers, the competition is also specifically aimed at architects, urban developers, preservationists, lighting designers, exhibition designers, media artists, scenographers, communication designers, as well as visionaries from any and all genres.

The 2018 edition takes place on 10-12 August, with a symposium on the 12th. Action artists, video designers, media designers, architects and musicians will gather in Weimar to participate in their work at the festival. During the festival weekend, three building facades in Weimar will be screened with selected video projects. Between 9:30 pm and midnight, international artists project their fifteen-minute contributions in the city center.

Genius Loci Weimar is expanding the festival repertoire to include the themes that surround media architecture. The performance format – a video show projected on the facade and repeated every half-hour – is broadly unchanged, but the questions being posed are of a different nature. While for previous video performances it has been sufficient to take the form of one-time production within the framework of a festival for projection art, the work that will be beamed onto the building of the University Library will be developed as a simulation of a permanent media architecture installation.

The concept for this innovative competition format emerged from the discourse on videomapping and media architecture that was pursued during Genius Loci Talk 2017. 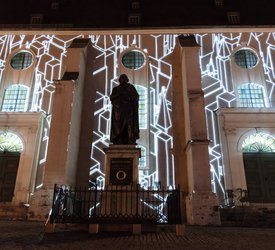 The format is intended to address the potentials and limitations of media architecture, and to reflect issues without fixed expectations: which content, which narration genuinely enhances the value, or is any communicative surplus value required at all, or is it sufficient to present a purely (re-)aestheticising work? Where is the threshold between augmentation and nuisance, which visual worlds succeed in reaching which target groups, how does media architecture function in the historical context, and where are the functional and aesthetic potentials?

While previous video performances could take the form of one-time performances within the framework of a projection art festival, the projection onto the building of the university library must also serve as a concept for and visualisation of a permanent media architecture installation.

More info about the festival: http://www.genius-loci-weimar.org/en/