The */ 15th Athens Digital Arts Festival invites you to submit your proposals for its next edition that takes place in spring 2019 in Athens, under the theme “The World is a Hologram”. Deadline for submissions is on 15 of January 2019.

Dating back to antiquity, theories which want us living in a hologram, apart from science fiction can also be endorsed by scientific data. Those who believe in the holographic theory of the universe, support that everything we know in our world is three-dimensional depictions of data, stored in a two-dimensional form somewhere at the edge of our universe. This automatically means that we are all closely bonded with everything around us, as part of one large unity where the present, past, and future coexist simultaneously. 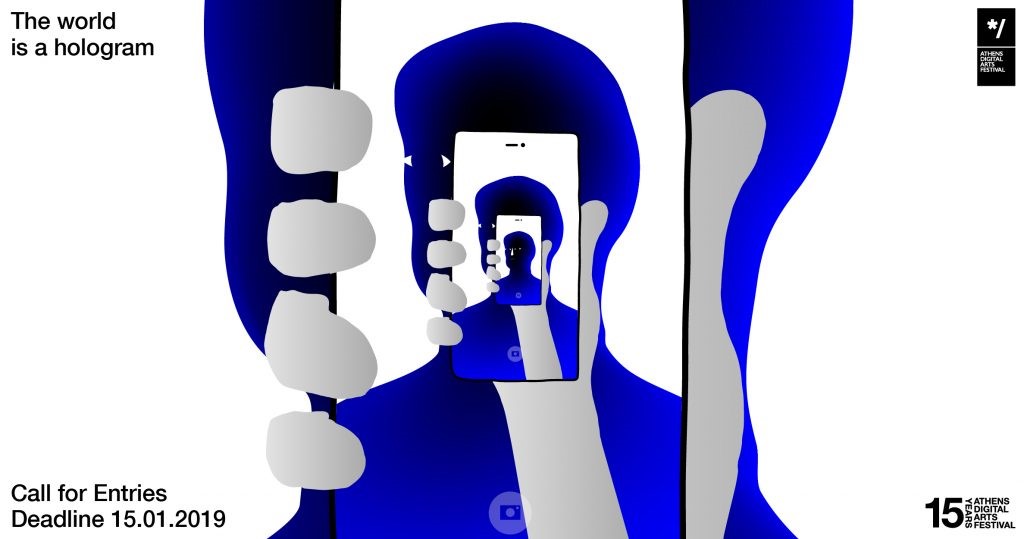 The hologram is often described as a three-dimensional depiction, consisted of two light rays (e.g.laser) while in order to properly work it must be also lighted by a third one. A fundamental feature of holograms is that all data are circulated through the whole, meaning that even if cut in two, still each piece will maintain all information intact. In this case, we will get two identical but complete smaller holograms, proving that this segregation is only fictive.

The scientific community, have found itself in front of a predicament while discovering that whatever gets past the event horizon of a black hole, as it can never leave, gets lost forever when the hole gets disembodied by Hawking Radiation. As a solution, mathematics were able to prove that when data gets pass an event horizon, they also get imprinted on its very surface, allowing them to escape and thus be maintained. This theory was named holographic principle and was considered eligible to be deducted on a universal level, arguing that the whole universe is the hologram reflection of two-dimensional data stored in its very borders.

Later experiments have proven that some subatomic particles under specific circumstances have the ability to communicate with each other instantaneously despite their distance, thus have given to the universe another credence of a hologram. Extending this research, scientists extracted that even the brain works in similar mechanics as memory is not stored in a sole neuron but through the schemes and patterns that the neural stimuli follow while extending throughout the whole brain.

Within the neurons of cosmic memory time does not exist, only ideas…

Detailed information about the submission process and the call for entries is available at the following link: www.adaf.gr