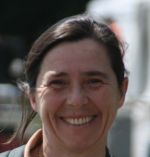 ICT expert, Director of Design and General Manager at Promoter srl, she’s been working on European cooperation projects since 1994.

Since 2010, she is Project Manager of digitalmeetsculture.net, online communication Platform powered by Promoter srl.

Previously, on behalf of Promoter S.r.l.:

Antonella is vice-President of PHOTOCONSORTIUM – International Consortium for Photographic Heritage, the non profit association whose purpose is the promotion and enhancement of the culture of photography and the photographic heritage and accredited aggregator of  the Europeana.eu portal of the European Commission. In this role:

Since 2020 President of the Evaluation and Monitor Committee of the Italian Ministry of Research for the National Technology Clusters.

Enterprise Fellow at Coventry University; since 2012, collaboration with Coventry University for the participation in European projects in the domain of social science and humanities, creativity, cultural heritage and technological innovation.

From 2002 until 2012 she has been advisor of the Italian Ministry of Cultural Heritage and Activities and Technical Coordinator of DC-NET ERA-NET, INDICATE, MINERVA series (Ministerial network for valorising digitisation activities in Europe) and MICHAEL series (Multilingual inventory of cultural heritage in Europe).

Editor of “A contribution towards a different understanding of the binary relationships of East and West“, developed within the PAGODE Europeana China project (Ljubljana Univeristy Press, Faculty of Arts, 2021, ISBN 978-961-06-0519-5)

She has been Member of the program committee of first EAGLE Conference (2014) and she is member of the EAGLE 2016 – 2nd International Conference on Digital and Traditional Epigraphy in Context.

She has been Member of the Data, Content and Middleware ASPIRE panel of TERENA.

From its establishment until 2012 she has been appointed by Decree member of the Concertation Table for the research priorities for the cultural heritage in Italy between the Ministry of Culture (MiBAC) and the Ministry of Research (MIUR).

Reviewer in 2014 for the Austrian Agency for International Cooperation in Education and Research (OeAD-GmbH).

Reviewer in 2013 for the FCT Call for a National Roadmap of Research Infrastructures of Strategic Relevance (FCT, Portugal).

Reviewer in 2018 for Lazio Innova, Regional Agency for innovation of Lazio Region (Italy).

She is author of two international patents deposited by Olivetti in 1985 and 1987 on intelligent video controller systems.

She is author of articles and publications around the themes of the Cultural Heritage, for a wide range of publications, see here.