‘Metamorphosis’ is the name of the new artwork, while 2018 sees important upcoming projects

Helaine Blumenfeld is a renowned artist who is appreciated all over the world. In 2007 she became the first woman to win the Il Premio Pietrasanta e la Versilia Nel Mondo, adding her name to the list of winners of this honour including Botero, Pomodoro and Marc Quinn. In 2008 the Royal Society of Sculptors held a major retrospective of her work and in 2011 Blumenfeld was awarded an honorary OBE to mark her achievements in sculpture. 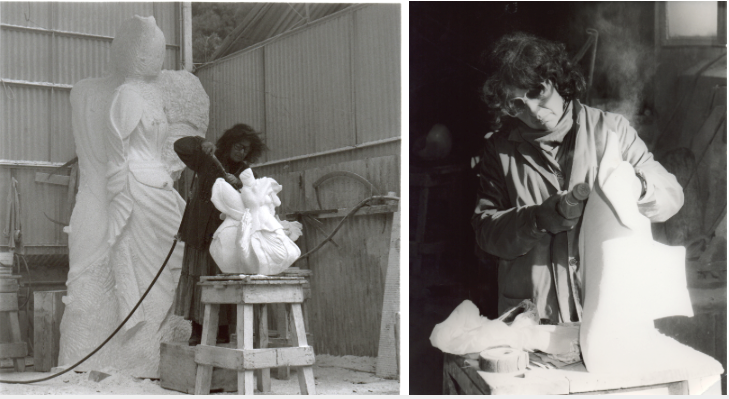 She is currently working on a monumental sculpture, ‘Metamorphosis’, using digital technology including a 5 axis CNC router, laser scanning and 3D printing at Europe’s leading sculpture foundry, Pangolin Editions. ‘Metamorphosis’ has been commissioned by Canary Wharf Group for Wood Wharf; a new luxury residential quarter to be installed in 2019. Two other sculptures Blumenfeld is creating at Pangolin include a sculpture which will be exhibited at Ely Cathedral and one which will be a exhibited at Blumenfeld’s solo show in 2019 in Pilane, Sweden.

Blumenfeld is embarking on one of the most ambitious periods of her career, while also exploring a completely new way of working using digital methods that are a far cry for the artisan, hand crafted nature of her artworks to date. Her upcoming projects include a group show at the Venice Biennale (26 May – 25 November 2018), a solo exhibition at Ely Cathedral (13 July – 28 October 2018) and the new film about her life and work to air on Sky Arts (18 April at 10pm). Please see the press releases and image sheet attached for further information.

The solo exhibition of large-scale sculptures will be presented in the magnificent setting of the 900-year old Ely Cathedral, Cambridgeshire, from 13 July – 28 October 2018 . Bringing together 17 bronze and marble sculptures, including six new works, the exhibition will be displayed throughout the cathedral and in the surrounding grounds.
The title of the exhibition, Tree of Life , takes its name from one of the most important and enduring themes in Blumenfeld’s fifty-year career – despite atrocities and widespread destruction, life finds a way to renew itself. Featuring five sculptures from the Tree of Life series, presented together for the the first time, the exhibition explores the spiritual and cultural symbolism of these works and the other sculptures on display, projecting a compelling narrative of energy, optimism and hope.

Helaine Blumenfeld says: “I found myself creating a sculpture that began with what looked like the trunk of a tree formed by many bodies twisted and turning, combining and informing the trunk. I realised, as I was completing it, that it represented the victims of the Holocaust. However, instead of disappearing in smoke, the trunk moved upward and opened into a panoply of branches with a regrowth of blossoms, and clouds of many leaves, creating a sense of hope. I was trying to express that, although there had been almost unbelievable destruction, there could still be renewal and regeneration. These bodies were vanishing, but their loss might provoke society to respond
with greater compassion and greater creativity.”
This piece was the first in a series of sculptures that centred around the Tree of Life motif.
Although each has a different emphasis, they are all about possibility and hope, healing and renewal, and represent a shift in Blumenfeld’s focus, moving from largely figurative and introspective subject matter, towards an outward-looking perspective in reaction to world events.