“ATHENA” is an acronym for the Ancient Theaters Enhancement for New Actualities, commonly named as the ATHENA Project. It was created in 2009 and concerned with the innovation, protection and preservation of ancient theaters across the Euromed region. Inherent as well is making the people, local communities, diverse actors across the Mediterranean more appreciative of the value of these theaters to making them more sustainable for future generations.

ATHENA Project is funded by the European Union under its Euromed Heritage 4 Program. It operates under the Regional, Monitoring and Support Unit (RMSU) which provides support, technical assistance and advice to the regional partners in the Euromed Heritage program  through the European Aid Cooperation Office of the European Commission. RMSU committed 57 million euros to fund partnership projects since 1998.

The ATHENA Project involves five countries across the Mediterranean. Each country provides specific study area, namely Petra and Jarash in Jordan, Carthage in Tunisia, Siracusa in Italy, Merida in Spain and Cherchell in Algeria. 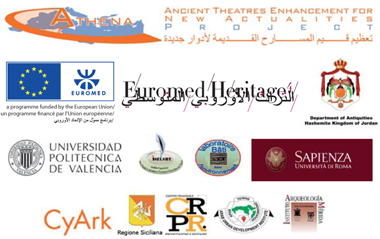 The Project is administered through different regional partner institutions. The Department of Antiquities (DoA) in Jordan is leader of the project, a first time development for a country in the “south” to lead a European funded project.

DoA’s main role is to coordinate the other partners and ensure the work process related to ancient theaters is run on time. Under its new management beginning in November 2011, and with the appointment of the new Project Manager, Nizar Al Adarbeh, the ATHENA Project got stronger and major activities took place throughout 2012.

The ATHENA Project consists of six Work Packages, divided into tasks and actions related to ancient theaters. Work Package 1 is devoted to setting up what is termed a common and scientific cultural framework for the project and is led by the Tunisian partner.

Work Package 2, led by the Italian partner, is devoted to building up a knowledge-based database and includes documentation and classification of raw scientific data from the digital scanning of the theaters by the Jordanian partner. Aim of WP2  is to slow down the theaters’ erosion with the the laser scanning, which can identify possible problems.

Work Package 3 is devoted to drawing up a possible sustainability strategy for ancient theaters that involve risk perception and mitigation and knowledge gathering to allow the creation of tools to enable sites to have greater long-term potentials.

This is all brought together in Work Package 4, that is concerned with the drawing up of a “management plan” to be used as a general framework by the consortium partners. WP4 is lead by Spain. Along the management plan is a user manual concerned with the utilization of theaters. The management plan,  drafted by the Spanish partner, is the result of data sent to the Institute of Heritage Restoration of the Polytechnic University of Valencia by the member countries of the ATHENA collective, data to be analyzed and put in a framework.

Work Package 5 is concerned with disseminating and promoting the project through printed, audiovisual and online materials.

All of the above is coordinated by Work Package 6, aimed at managing the project, controlling the quality of it and ensuring its results. WP6 is led by the Department of Antiquities in Jordan.

←back to Athena Project Showcase