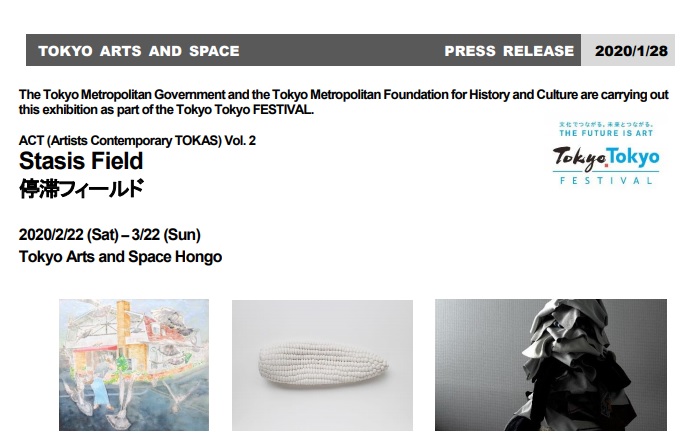 Tokyo Arts and Space (TOKAS) has supported artists in a multi-career-stage and continuously supportive program through endeavors such as open call exhibitions, exhibitions of contemporary artists, and international fellowships. In the Artists Contemporary TOKAS (ACT) series launched in 2018, exhibitions will be held to introduce artists who are worthy of attention now, centered on those that have taken part in TOKAS programs. Introduced at this second installment, titled ”Stasis Field,” are works by three artists/pairs: TANAKA Shusuke, HIROSE Nana & NAGATANI Kazuma, WATANABE Go.

“Stasis field” is a term that has been used in science fiction novels and games, to refer to an area in which time seemingly stands still or is significantly delayed, and contents appear motionless. Due to the standstill and crystallization of time in a stasis field, objects in that area are in a state where they can be closely observed, or slowed down to such an extent that their shapes appear distorted.
In their works, the three artists featured in this exhibition stop or delay time in order to make it observable from their own respective points of view, and produce works of art in which they actively respond to and creatively express the differences, shifts and distortions that result from such temporal stagnation. In times when social life is increasingly dominated by the acceleration and quick processing of all kinds of matters. Experiences we make in such special kinds of situations “Stasis fields” may function as turning points that changes existing ideas and previous perceptions.

Artists/ About the work

TANAKA Shusuke (Born in 1986): Tanaka draws paintings based on inspirations encountered in daily life which bring him fresh sensations and experiences that make him feel scared or uncomfortable. The sceneries he illustrate contain a single element depicted in unusual size or highlighted in a certain way. This approach causes distorted spatial perception and a strange sense of reality. At this exhibition, Tanaka presents several new works showing sceneries he encountered recently.

HIROSE Nana (Born in 1980) & NAGATANI Kazuma (Born in 1982): The artist duo moved to Germany in 2007 and continues to produce artworks there. They transform and catabolize daily commodities and objects which we encounter on a daily basis. They explore how exactly viewers perceive the subject-matter of their works. At this exhibition, they present an installation “Still life”, consisting of fruits, vegetables, cups, and other objects – about 300 in total – molded by a special kind of porcelain compound. The objects in their works show distortions. These appear to be intentionally deformed by some kind of external force, and are in fact produced by a chemical reaction triggered by the heating of porcelain. These numerous white objects transform the entire space which they are placed in. This encourage viewers to reflect upon familiar perspectives on things.

WATANABE Go (Born in 1975): Watanabe recreates real sceneries and objects around him by 3-D computer graphics and creates video works which gradually transform in ways disconnected from physical and optical laws. Based on the experience of spending a year in Finland in 2017, he produced a work in which he emphasized the perception of light in Finland which he found to be different from that of Japan. At this exhibition, he presents a new video installation that questions material, spatial and temporal characteristics by reorganizing the temporal order and angles of light falling onto books and a pile of laundry.