The whole seminar, in double language (English and French) was recorded and screen captured. A video is available via the E-Space YouTube channel.

On the 29th of November 2016, Europeana Space organised a seminar entitled “The Ghent Altarpiece in 100 Billion Pixels” at the imec offices in Brussels. During the seminar, the Europeana Space educational demonstrator “Photographic investigation of artworks” was used for the first time in a real world setting. 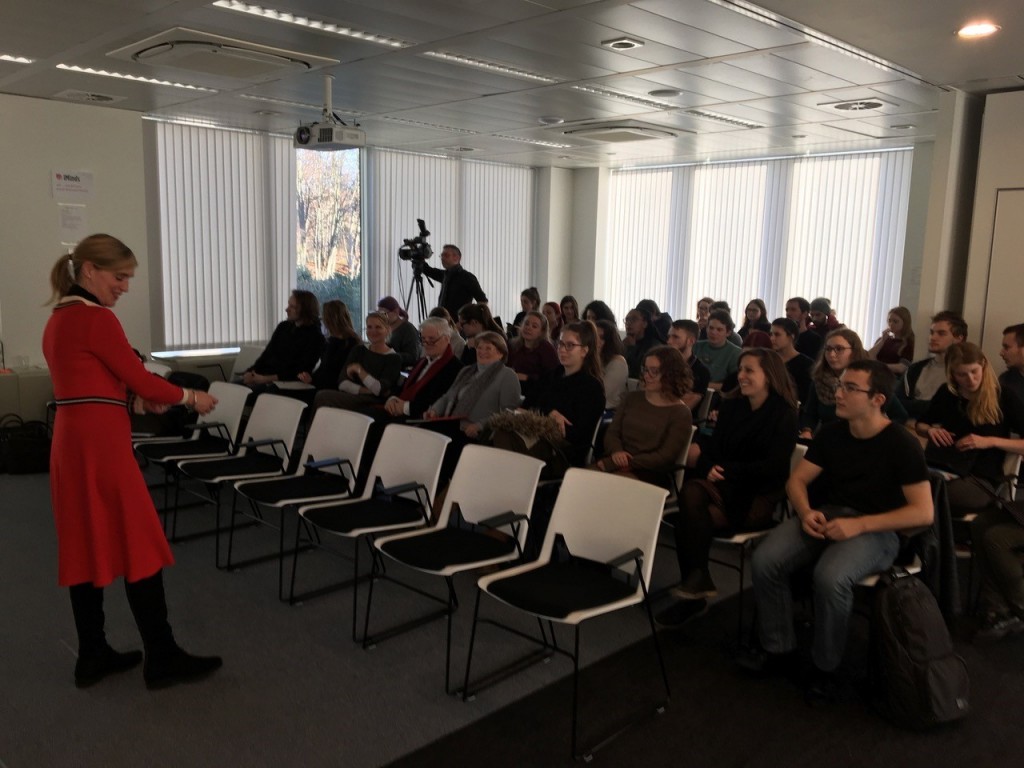 The demonstrator “Photographic investigation of art works” is based on the website “Closer to Van Eyck – Rediscovering the Ghent Altarpiece”. The website presents more than 100 billion pixels of image data of the Ghent Altarpiece (1432) in visual light macrophotography, infrared macrophotography, infrared reflectography and X-radiography – hence the title of the seminar. The website provides a tremendous resource for education. For example, detailed insights can be taught on painting techniques, art restoration, imaging modalities and image processing can be shared with the students.

However, during a lecture, navigating between images from one detail to another and switching between presentation and the website can be cumbersome. Therefore, Europeana Space created a demonstrator that integrates the viewer into an interactive presentation. The presentation combines typical slides with one or more interactive viewers. This allows to navigate from one view to another with a single mouse click. All functionality available on the website, such as comparing different modalities, is available in the presentation tool. Additional features are available as well, such as comparison of a virtually unlimited number of viewers. This allows to put multiple details from different paintings next to each other on a single slide, for example allowing to focus on specific aspects such as pearls, faces or eyes.

The aim of this event was to demonstrate the added value of the demonstrator during a real seminar, compared to traditional presentation tools such as Microsoft PowerPoint and compared to manually navigating a traditional website such as Closer to Van Eyck.

The seminar was organised for students Art History of the Université Libre de Bruxelles (ULB). First, Frederik Temmermans from imec gave an introduction about the aim of the event and its context within the Europeana Space project. Thereafter, word was given to Valentine Hendriks and Bart Fransen for their presentation “The Ghent Altarpiece in 100 Billion Pixels”. Their presentation focused on the art historic background of the Ghent Altarpiece, the different documentation methodologies, Van Eyck’s painting techniques and comparative research. 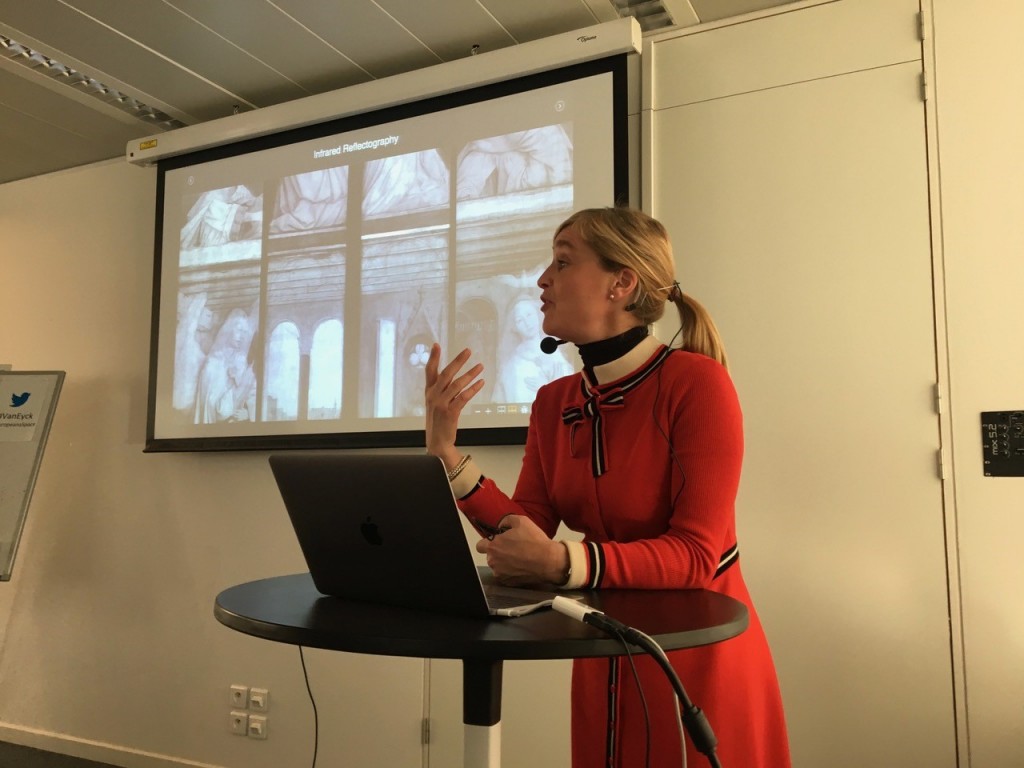 Valentine Henderiks gained a degree as Doctor in Art History from the Université Libre de Bruxelles (ULB). She is scientific collaborator at the Centre for the Study of the Flemish Primitives and lecturer at the ULB. Her PhD, dedicated to the life and work of Albrecht Bouts (1451/55-1549), received the prize Jacques Lavalleye-Coppens from the « classe des Arts » of the Royal Academy of Belgium, and was published in 2011 in the series “Contributions” (10) edited by the Centre. She is curator of the exhibition “Passion. Albrecht Bouts and the Face of Christ” and is project director of “Wings & Links”. 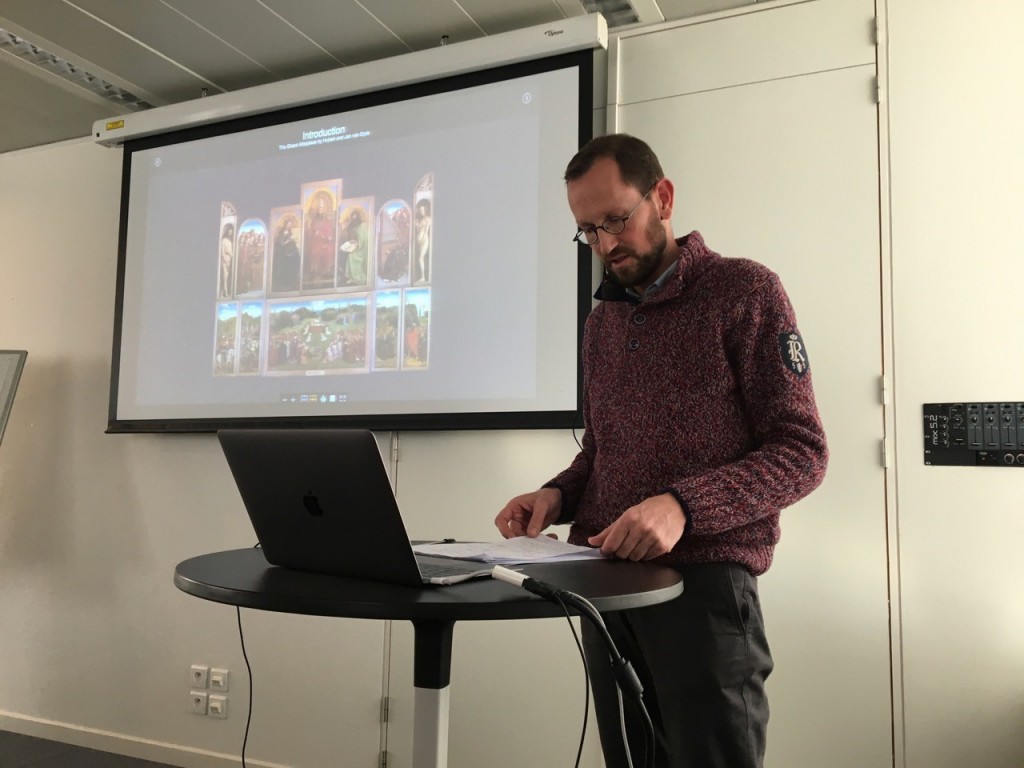 Bart Fransen is Head of the Centre for the Study of the Flemish Primitives. He gained his degree as Doctor in History of Art from the Catholic University of Leuven in 2009 with a PhD on “Rogier van der Weyden and Stone Sculpture in Brussels” (Harvey Miller, 2013). He worked at the Prado Museum in Madrid, the Royal Museums of Fine Arts of Belgium and the Catholic University of Leuven. He publishes and lectures on Early Netherlandish art and on the artistic relations between the Burgundian Netherlands and Spain. He is Project Director of VERONA (Van Eyck Research in OpeN Access).

A short survey was distributed to the students asking to provide their opinions and feedback. Because of the international nature of the Europeana Space project, and because of the cosmopolitan setting in Brussels with a multilingual audience, the event was organised bilingual, switching between English and French.

Access the Demonstrator and view the recording of the seminar HERE

More about the Demonstrators on the E-Space education website