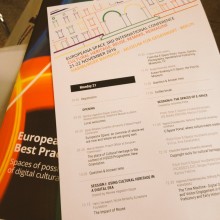 After the nice success of previous events in Venice and in Tallinn, E-Space Third International Conference took place in November 2016 in Berlin, hosted by partner SPK at the Hamburger Bahnhof Museum of Contemporary Art. The conference themes spread from the … END_OF_DOCUMENT_TOKEN_TO_BE_REPLACED 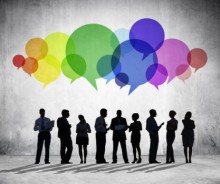 During Euromed 2016 conference in Nicosia (Cyprus) Monday 31st October 2016 h. 5 pm Digitization has been a major objective for most, if not all, cultural content holders in every European country. Museums, Librarie, Galleries, arts organisations and also private … END_OF_DOCUMENT_TOKEN_TO_BE_REPLACED

PostScriptum and  the PanHellenic Union of General Directors of Local Administration “Kleisthenis” organized a unique PS Value Talk Event called “Cultural Policy and Local Growth” on Friday the 20th of May 2016 at Hyatt Regency Thessaloniki. The event was held … END_OF_DOCUMENT_TOKEN_TO_BE_REPLACED

E-Space partner SPK is an important institution in Germany, that regularly organizes and participates to cultural heritage events and workshops
Latest dissemination activities by SPK

At the Ethnologisches Museum in Berlin, the Europeana DSI Workshop «Tools to make your collection widely visible» was co-organized by Michael Culture association, NEMO and SPK, within the Europeana Digital Service Infrastructure (DSI) project, on 15th Februaty 2016. Sarah Wassermann … END_OF_DOCUMENT_TOKEN_TO_BE_REPLACED

Key selection criteria for the winners was the business potential of the idea, or product, or service proposed in the chosen projects.
…. and the winner is…. (E-Space incubated projects)

One of the key objectives of Europeana Space is to help creative industries to leverage on digital cultural content for creating new products and services – thus creating new businesses and job positions. To do so, a series of 6 … END_OF_DOCUMENT_TOKEN_TO_BE_REPLACED

Contemporary education, formal classrooms, museum educational programmes, lifelong learning are all increasingly embracing ‘the digital’. As more and more arts and culture artefacts become available in this digital space, it was only a matter of time before the two worlds, … END_OF_DOCUMENT_TOKEN_TO_BE_REPLACED

The MOOC is under development and will be live in October 2016.
E-Space for education: launching a MOCC “Creative with Cultural Heritage”

Europeana Space project, focusing on increasing and enhancing reuse of Europeana and other online collections of digital cultural content by creative industries and education is developing a MOOC, a massive open online course, to be launched in the fall of 2016. … END_OF_DOCUMENT_TOKEN_TO_BE_REPLACED