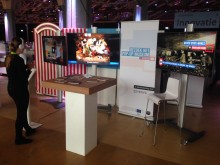 Cultuur in Beeld (Culture in Focus) is an annual seminar organized by the Dutch Ministry of Instruction, Science and Culture, addressing the most relevant themes for the cultural sector. The 2016 edition in Rotterdam, on 7 December, was focused on … END_OF_DOCUMENT_TOKEN_TO_BE_REPLACED 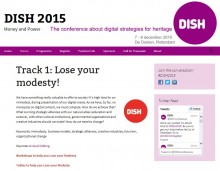 Europeana Space and the Europeana TV pilot were extensively presented at DISH 2015 in Rotterdam, an important biannual conference about digital strategies for heritage. A table session was chaired by Greg Markus (NISV), under the title: Adding another layer: Europeana Space … END_OF_DOCUMENT_TOKEN_TO_BE_REPLACED

Hacking Culture Bootcamp, the first hackathon of Europeana Space project, took flight on 9 April 2015 with the pre-event, where the hackathonees met the team and learnt practical information about technology, the toolkit and available content for experimenting with Europeana TV pilot. END_OF_DOCUMENT_TOKEN_TO_BE_REPLACED

On 25-26th of February 2015, the EuropeanaTV team organized a workshop at Rundfunk Berlin-Brandenburg (RBB) in Potsdam to work out a SmartTV app. It had to use RBB content about the Berlin wall together with related materials from Europeana. This workshop is part of the work realized in the TV pilot of Europeana Space project. END_OF_DOCUMENT_TOKEN_TO_BE_REPLACED

The EuropeanaTV pilot members took part in an interactive workshop to create a SmartTV application that lets you travel back to historical events. It is the “Rewind App! and we are excited to announce the EuropeanaTV hackathon on the 8th, 9th, and 10th of May at Waag Society in Amsterdam with inspiring pre-events on March 25th and April 8th. END_OF_DOCUMENT_TOKEN_TO_BE_REPLACED 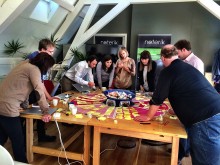 The meeting was organised to plan in bigger detail the upcoming activities of the 6 themed Pilots of the project.
EuropeanaSpace, creative & organizational meeting in Amsterdam

The first day was occupied with an interactive brainstorming session, facilitated by partner and WP4 leader iMinds, that saw 12 consortium members being busy with imagining future scenarios and visionary applications for the 6 pilots. The occasion of the meeting was also the good place to preliminary present and discuss the upcoming Opening Conference of Europeana Space, to be held in Venice in mid-October 2014 hosted by University of Venice. END_OF_DOCUMENT_TOKEN_TO_BE_REPLACED

Europeana Space is a very large project characterized by experimentation and creativity: in facts its main aim is to trail new ways of re-use for the digital cultural heritage, in order to unlock its potential in terms of business and creation of new jobs. An important meeting will take place in Amsterdam on 15-16 May, hosted by partner Noterik and coordinated by the WP4 leaders iMINDS and Promoter. END_OF_DOCUMENT_TOKEN_TO_BE_REPLACED 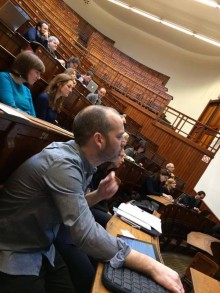 Beside the project members, participants in the meeting were the EU Officer Marcel Waletet and the deputy director of Europeana Foundation Harry Verwayen. The kick-off meeting was already the place to start the organization of the first public event of Europeana Space: the appointment is in Venice, in October 2014 with a great opening conference organized by the hosting partner Università Ca’ Foscari. END_OF_DOCUMENT_TOKEN_TO_BE_REPLACED