Nice success for the event organized in Venice, with many interesting speeches

Title of the event was “Digital Cultural Content Re-imagined: New Avenues for the Economy and Society”, and it was held in the historical setting of Auditorium Santa Margherita in Venice. The core topic of the conference was how to enable a creative re-use of digital cultural content thus unlocking the business potential of cultural heritage and fostering the creation of new jobs and economic growth. A very interested audience almost fulfilled the parterre of the former theater, now conference venue. 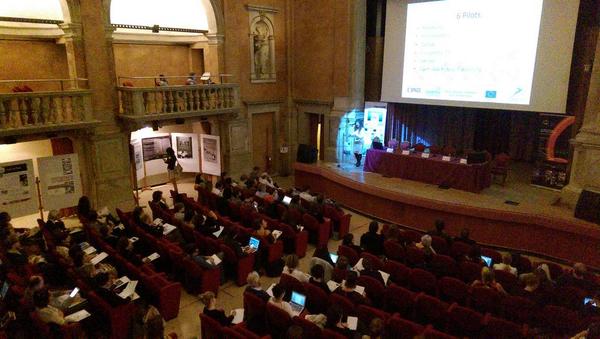 The event was opened with a warm welcome to all the participants by Leonardo Buzzavo, teacher of Strategy at the department of management of Ca’ Foscari University – the hosting partner; then it followed an interesting speech by the University Rector Michele Bugliesi, on the importance of the digitization activity for cultural heritage. 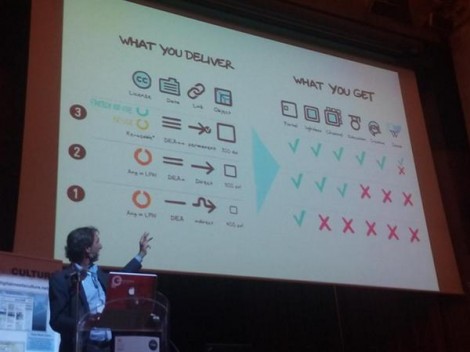 After an introduction speech by the project coordinator Sarah Whatley, about the vision behind Europeana Space, the first keynote speaker was Harry Verwayen, deputy director of Europeana Foundation, who widely presented important lessons learnt during the project Europeana Creative and other initiatives, such as a nice example of winner of Apps for Europe project, the Europeana Beacons app exploring the city of Siena.

The second keynote speaker was  Piero Attanasio of AIE (Italian Association of Editors) who talked about copyright and its relationships with digitization programmes, also providing an interesting economic interpretation on the current legal debate on IPR.  After him, Antonella Fresa of Promoter described how Europeana Space is addressing the core issue, by trying to lower those barriers that limit the creative re-use of digital cultural data.

The show then began, with the 6 themed pilots presented in pitch-style and lively talks by their representatives: Dance, Photography, Open and Hybrid Publishing, Museums, Games and Europeana TV are developing nice prototypes which the conference audience could have a glimpse of.

At the end of day 1, a networking session was held with aperitif in a near bar.

On the second day, Charlotte Waelde from University of Exeter opened the discussion with a speech entitled “This contested space” which again introduced the topic of Intellectual Property Rights, and the conference continued with an hands on talk of Prodromos Tsiavos about using open and hybrid licenses, and with Simon Cronshaw and Peter Tullin who spoke about digital cultural content as a plenty of new opportunities for growing audiences and income.

An interesting moment was offered then by Daniel Okeloen (Noterik), who showed the current state of multiscreen applications, examples of multiscreen applications under development and an open source multiscreen toolkit. The conference was closed with a panel discussion moderated by Antonella Fresa and including Harry Verwayen, Leonardo Buzzavo, Prodromos Tsiavos, Fred Truyen (KU Leuven): the panelists discussed around the theme of missing, so far, a real leveraging on digital cultural data:  despite the constantly growing availability of digital content and the movement about public domain and rights licensing for re-use, the actual exploitation of such content is in facts not happening on the market.

As a side activity, the registered participants could in the afternoon visit the Venice incubator H-Farm, an inspiring environment for creativity and technology.