All Our Yesterdays goes Belgian!

Europeana Photography final step is a conference in Heverlee/Leuven and a Belgian edition of the exhibition of ealy photography masterpieces.

The second instance of All Our Yesterdays will take place from February 1 to March 15, 2015, in Campus Library Arenberg – Heverlee and Tweebronnen Library – Leuven (BE). While, for the greater part, this exhibition will re-produce the first run of All Our Yesterdays, its Belgian flavor will be enhanced by including photographs from the Leuven City Archives. At the Heverlee site, traces of local citizens’ “Yesterdays” will figure side by side to those of their international counterparts, as a new but integrated part of the original All Our Yesterdays-setup. 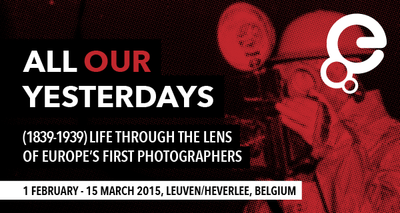 In Leuven’s city center, the public library will host an additional exhibition chapter, dedicated to Trading Spaces / Changing Places: how have the city and its rural surroundings interacted throughout the years and what remains of this? Which century-old street views are bound to draw up a stir when compared to today’s cityscape? And in how far or by what means have people tried to adapt their living environment to something more comfortable or more agreeable to the eye…?

From lost landscapes to stunning portraits and fascinating shots-in-action, Trading Spaces / Changing Places seizes the most compelling images from Leuven’s past, to make for a powerful injection into the present-day city dynamics. 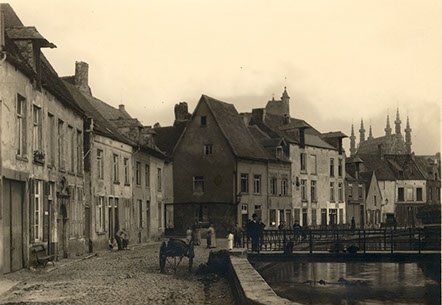 The Slaughter Street, along with surrounding streets and lots were completely demolished after 1914. The plans had already been recorded around the turn of the century, but were brought by the war devastation to faster execution. (SAL, Photo Library)

The opening of the Leuven exhibition coincides with the ultimate days of Europeana Photography’s project term. Small wonder that a project plenary meeting and a scientific conference have been aligned with the official vernissage.

After a day (28 January) of dotting the i’s and crossing the t’s, reviewing the results of the consortium’s endeavors, and discussing its future plans as the association PHOTOCONSORTIUM, the conference on 29 and 30 January will be devoted to The Impact of Digitization on Photographic Heritage: Memories Reframed. Hosted by CS Digital (KU Leuven) and the Lieven Gevaert Centre for Photography in Campus Library Arenberg, this event aims at assembling scholars from the field of photography and professionals from photo-archives, in order to develop an understanding of responsible archival practices towards photographic heritage in the context of the promotion of public access through digital portals.

Topics to be tackled: archival practices for photographic heritage, digitization and preservation, Europeana, public exposure and the archival mission. Confirmed key note speakers at present are Elizabeth Edwards (De Montfort University, Leicester – UK) and Simon Tanner (King’s College, London – UK). Next to their contributions, the program includes collection pitches by all content providers involved in EuropeanaPhotography, presentations from ‘befriended’ Europeana-projects including Europeana Space, and a roundtable on IPR chaired by Charlotte Waelde (University of Exeter – UK).