Tibetan Opera, the most popular traditional opera of minority ethnic groups in China

Digital technologies contribute to the protection of the essence of Tibetan culture, inscribed in 2009 on the Representative List of the Intangible Cultural Heritage of Humanity

Let’s continue our research on intangible cultural heritage to learn about the most popular traditional opera of minority ethnic groups in China, the Tibetan Opera, nowdays accessible online at  https://www.telegraph.co.uk/china-watch/culture/traditional-tibetan-opera/, or at http://www.chinadaily.com.cn/a/201909/03/WS5d6ddb68a310cf3e35569695_4.html.

The contribution of digital technology to the discovery and research on intangible heritage is becoming increasingly important and necessary to achieve what was declared in 2003 in the UNESCO Convention on the Protection of Intangible Cultural Heritage.

The Tibetan Opera, inscribed by UNESCO in 2003 within the Representative List of the Intangible Cultural Heritage of Humanity, is the third case study that we would like to tell. It follows the stories of two other projects on intangible heritage:  the project about the Patrimoine Vivant de la France that collected 114 films and more than 300 testimonials of horse riding, gastronomy, hunting, masters perfume-makers etc., and the project of  South China Research Center of the Hong Kong University of Science and Technology that gives access to social practices, legends, puzzles, expressions.

As stated in the Convention, the expressions of intangible cultural heritage are threatened by globalisation, it is also true that digital technologies such as videos, recordings, interviews become fundamental to ensure that the oral traditions transmitted by our ancestors, including rites and feasts can be preserved to foster intercultural dialogue. This is what the Culture Department in Tibet Autonomous Region of P.R. of China started doing, dealing with traditional dances. 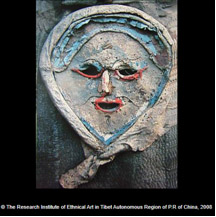 Tibetan Opera has been inscribed on the Representative List of the Intangible Cultural Heritage because it “represents the essence of Tibetan culture, and is recognized by its practitioners as central to their identity and a symbol of continuity that they endeavour to pass on from generation to generation” (http://en.chinaculture.org/focus/focus/2009feiyi/content_363115.htm).

As we read in the site of UNESCO, Tibetan Opera is a comprehensive art combining folk song, dance, storytelling, chant, acrobatics and religious performance. Most popular in the Qinghai-Tibetan Plateau in western China, the performance begins with a prayer ceremony, including the cleansing of the stage by hunters and blessings by the elder, and it concludes with another blessing. The heart of the opera is a drama narrated by a single speaker and enacted by performers supported by groups of singers, dancers and acrobats. 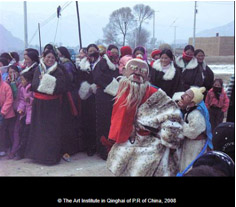 Actors wear traditional masks of a variety of shapes and colours that contrast with their simple makeup. Performances may take place in public squares or temples (or, today, on stage), with the centre of the space marked by a tree placed on the ground, wrapped in colourful paper and surrounded by purified water and theatrical props. Rooted in Buddhist teachings, the stories told in Tibetan Opera recount the triumph of good and the punishment of evil and therefore serve a social teaching function for the community.

This multifaceted representative of Tibetan art and cultural heritage also acts as a bridge among Tibetans in different parts of the country, promoting ethnic unity and pride. I suggest you a video on Tibetan Opera, known as Lhamo or Ache Lhamo in Tibetan. The video, available on Youtube, allows to admire dancers in extraordinary religious ceremonies and it looks like watching a fossil culture that returns to  life.

Thanks to the spread of those videos representing the Tibetan Opera dances, supported by digital availability and online distribution, a local interest in this intangible cultural heritage has also increased: if in 2010 there were only 30 Tibetan folk teams work, almost a decade later, the teams have increased fivefold.

Digital technology is not only necessary for the preservation of intangible heritage through the creation of multimedia documents, stories and videos that can provide a longer life to vulnerable cultural jewellery but also to share precious cultural experiences and to improve the knowledge and awareness of history and traditions of the civilisations of many nations and regions worldwide.