Notes from the second day of the PREFORMA International Conference

Following on from Notes from ‘Shaping our future memory standards’ the final PREFORMA conference, day 1, here are the notes from day 2: 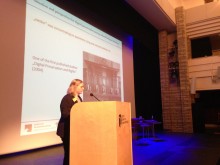 Monika Hagedorn-Saupe from the Prussian Cultural Heritage Foundation was the first speaker on day 2 of the conference. She spoke about the ‘Situation and perspectives for digital preservation among cultural heritage institutions’.

She has been involved in the nestor network which aims to raise awareness about digital preservation and build a network among organisations in Germany. Their aim was not to develop a technical solution..

They have since produced a handbook for digital preservation, scientific reports and guidelines, and have set up the Nestor seal for trustworthy archives. They have a dedicated working group investigating format detection and have introduced veraPDF and DPF Manager as important tools to their network.

Development of digital preservation knowledge is still quite uneven. Some organisations are yet to be convinced about the importance of file format validation, however, in other areas, there is an increasing understanding, particularly around text and image formats and standards. AV formats are still being evaluated and they are at a stage of monitoring the formats validated by MediaConch. 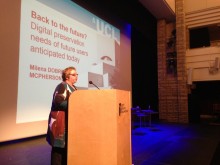 The second talk of the day was ‘Back to the future? Digital preservation needs of future users anticipated today’ by Milena Dobreva-McPherson of University College London Qatar. She commented that through the summaries of the projects she can see that a lot of useful work has been done, but also recognised that many other topics remain for future work. It is difficult to address the subject of the future and compared it to Alice in Wonderland: how to do know if you have got there, if you don’t know where you are going?

Preservation has many aspects to it. It is seen as a roadmap, users are today’s users – we cannot predict who the future users are. There are many horror stories about how much data might be lost – but it is based on projections, you don’t hear that many actual horror stories of lost data.

Milena observed that there are two ways of looking to the future: speculating verses creating. PREFORMA has taken the second approach: it is creating tools, new models and thinking in digital preservation.

We need joint efforts to take digital preservation forward. There are not many new initiatives coming up. We need to think about the next steps and what kinds of projects we want in future. We need to define what makes digital preservation skills unique and explain how they are connected to the issues. Milena called on participants to blend with other communities and be stronger in communicating our value. We are good at hiding behind the words ‘long term’. Users want results now. We have success stories and we should be more active in sharing them. 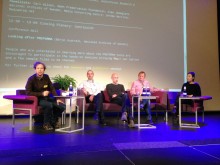 The final panel sessions addressed ‘Business models around open source software’ chaired by Peter Bubestinger-Steindl, AudioVisual Research & Development. The discussion began with a show of hands – all of the audience uses some kind of open source software, however, only some of them have ever paid for it.

Open source is often perceived as free work and commercial software is seen as the ‘opposite’. Open source is also confused with freeware. Jérôme Martinez from MediaArea said that his organisation is commercial and they develop open source software. He still needs to explain what open source is nearly every day. Someone needs to pay for it – developers don’t just work for free, they need to make a living.

Carl Wilson explained how the Open Preservation Foundation’s business model is different. We are not raising revenue from software sales, our income currently comes from membership fees and projects. It means that any organisation can download the software for free, and OPF members get support using the tools we maintain including JHOVE, fido and now veraPDF. The OPF was set up off the back of a large research project (Planets) to sustain the results. The software we adopt is driven by our members’ interests, for example, we adopted JHOVE at the request of our members. JHOVE is widely used, but only currently paid for by OPF members.

Julia Kim explained that the Library of Congress recently became members of the BitCurator consortium. It was difficult to find a logical accounting code with the administrators and managers for the membership. More transparency around different business models would help users to ‘sell’ the idea of open source software internally. She commented that JHOVE is integrated into their repository – it has become a standard because everyone uses it. She is now also relying on MediaConch for her work, but is uncertain of how long it will take to integrate it into their production environment.

There is still a lot of confusion about open source business models. If there is not a price tag, how do you deal with it? Users want to pay for it, as otherwise it ‘feels like stealing’ but there is not a process in place.

Secondly, there is still a problem with perception about the quality of open source software in management. Many users are so reliant on it now that this perception is gone, but it’s still an issue at management level. It’s difficult to pay for add-on services if the price point it zero – that sets that anchor for additional costs. We need to break this link between price and quality. Quality is independent of a licence.

Carl pointed out that the internet is built on open source software. It’s reliable and runs 24 hours a day. This was highlighted by the heartbleed bug. It transpired that it was maintained by one guy in Germany, it was fixed and internet commerce continues to use it. Encryption is another area where open source has benefits that aren’t always intuitively apparent. Open source means that the code can get lots of eyes on it and it can be thoroughly tested. When Sony Blu ray encryption was released it was cracked within 24 hours. Open source is not a new alternative that came later, it is the foundation of a lot of the software and systems we use today.

One of the main advantages of open source is that you can test and quality assure your software. By doing this you can mitigate the perception of lack of quality. The community is also very important. We are working in a niche area and using open source means you are not dependent on a single developer (or company). If you want to modify the software you can pay someone else to do it. 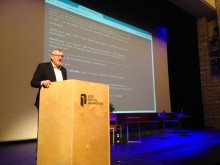 Borje Justrell gave the closing remarks for the conference ‘Looking after PREFORMA’. He explained that the three conformance checkers would be sustained by the suppliers through different means, and thanked everyone for their participation in the conference, and for their feedback throughout the project. He encouraged the audience to read the new PREFORMA handbook, summarising the project’s work.