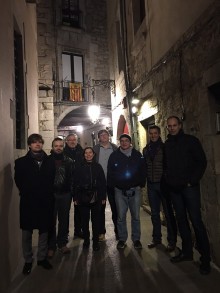 Between 20 and 30 January 2016, a team of representatives of the PREFORMA project, coordinated by Peter Pharow of Fraunhofer IDMT, visited the three consortia that are currently working in the prototyping phase: veraPDF, Easy Innova and MediaArea.net.

Aim of the visits is to better know each other, get in a closer touch with the suppliers, see the people working in their own environment, analyse the current status of the three open source projects and start future possible collaborations. 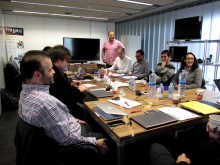 Peter Pharow, Börje Justrell, Antonella Fresa, Benjamin Yousefi and Sònia Oliveras i Artau composed the PREFORMA delegation who participated in the first visit, which was planned at Easy Innova premises in Girona on 20-21 January 2016. The team discussed with members of Easy Innova and of the University of Basel several topics, among which the status of DPF Manager, the evolving functionalities, the process of community building, and the status of standardization activities.

In addition, a representative from the National Technical University of Athens (Marios Phiniketos) joined the meeting to plan the integration of DPF Manager into the Technical Space, a web based application for the development of applications and services based on digital cultural content developed in the framework of the Europeana Space project.

The other two visits (to veraPDF and MediaArea.net) took place on 28 and 29 January in Brussels, in the occasion of the FOSDEM Conference.

The team discussed with members of veraPDF Consortium and of MediaArea.net several topics, among which: status of the conformance checkers; capabilities for software; evolving functionalities including interoperability and API; usability and user requirements, user groups, scenarios; testing for quality assurance and accuracy; code transparency, media files, and more; achieving reference implementation; awareness of what is still missing; status and progress in format specifications; reporting formats; scalability and optimization for large file sets; collaboration with other projects (such as for the integration of MediaConch with Archivematica) and with the open source community; status of standardization activities.

In addition, the PREFORMA members could drop in on the PDF/A Technical Working Group meeting to gain an insight of how it works.