A collaboration between academics from Goldsmiths, University of London, and Coventry University, Photomediations: An Open Book is the outcome of the Open and Hybrid Publishing pilot – which is one of six Europeana Space pilots. The pilot redesigns a coffee-table book as an online experience to produce a creative multi-platform resource that explores the dynamic relationship between photography and other media.

Photomediations: An Open Book uses open content, drawn from Europeana and other online repositories (Wikipedia Commons, Flickr Commons) and tagged with the CC-BY licence and other open licences. In this way, the book showcases the possibility of the creative reuse of image-based digital resources. 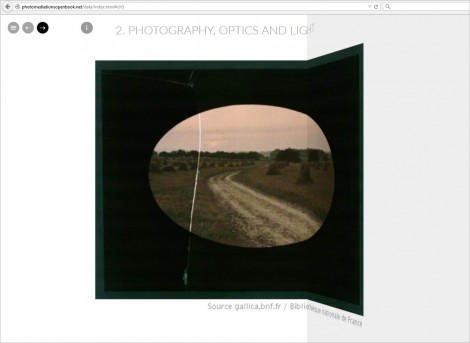 Through a comprehensive introduction and four specially commissioned chapters on light, movement, hybridity and networks that include over 200 images, Photomediations: An Open Book tells a unique story about the relationship between photography and other media. These main chapters are followed by three ‘open’ chapters, which will be populated with further content over the next 18 months: an open reader (featuring academic and curatorial texts), a social space and an online exhibition.

Photomediations: An Open Book’s online form allows for easy sharing of its content with educators, students, publishers, museums and galleries, as well as any other interested parties. Promoting the socially significant issues of ‘open scholarship’, ‘open education’ and ‘open access’, the pilot plays an important social and cultural role. It also explores an alternative low-cost publishing business model under the heading of ‘open and hybrid publishing’, as a viable response to the increasingly threatened traditional publishing structures.