Hack The Book Festival: Celebrating the future of the book and cultural heritage

Preparations for the festival were ongoing for more than three months and the atmosphere of the event was never less than jovial and electrifyingly creative.

The Hack The Book Festival was held on January 22-24 2016 at the Onassis Culture Centre in Athens and it was a roaring success.  The Festival was twofold: it comprised of an educational workshop held under the auspices of the Europeana Space project which took place on the morning and afternoon of 22nd of January; the titular hackathon of the Festival was inaugurated with talks by Joanna Zylinska, Gary Hall and Chris Meade on the evening of the 22nd and unfolded throughout the 23rd and the 24th of January. 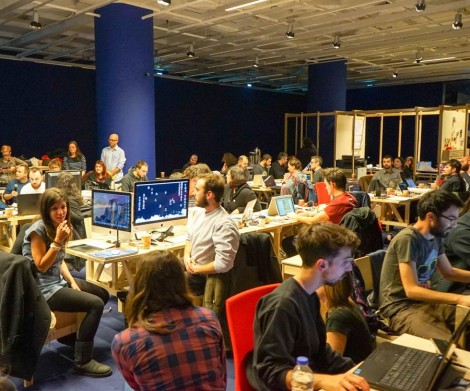 Preparations for the festival were ongoing for more than three months. Participants to the event were selected from a wide pool of applicants who were invited to submit concept notes in the months leading up to the festival; the festival itself was preceded by a well-attended pre-hackathon event in which designers, programmers and artists shared their expertise and offered their mentorship to potential participants. At the hackathon itself, ideas on the concept of the book as a repository of ideas and affect, as a distribution model, as an artifact and as an interface were exchanged, tested, refined and implemented in dazzling prototypes.

The participants were asked to pitch their projects to the judges, both in public and in private, and the feedback provided helped streamline their pitches and their projects even further. The participants were also ably aided throughout the weekend by a dedicated genius bar consisting of content experts, designers, programmers and artists. The atmosphere in the festival even when time for the contestants was running out was never less than jovial and electrifyingly creative. The final prototypes displayed a significant degree of imagination, creativity, social conscience and a healthy amount of irreverence: the final prototypes presented at the pitching stage made use of open source digital cultural assets while simultaneously rethinking existing interfaces and platforms. The final results showcased not only the diversity of participants and projects, but also a real need to create spaces where creative endeavor can flourish.