This year, FutureEverything celebrated its 20th anniversary. For the last two decades the festival has brought people together to imagine, shape and question the vision of a truly participatory society. A belief in the emancipatory and creative potential of new technologies runs throughout digital culture. It is found both in the open source community and in the rhetoric of Silicon Valley start-ups.

In recent years, the contradictions in this vision have come to the surface. The digital age has brought a collision of positives and negatives. Today we live with the consequences of the digital turn and these are not all benevolent. Centralisation, inequality, electronic waste and loss of privacy at an unprecedented scale have challenged our assumptions about the universally positive effects of digital innovation. We see how disruptors like Uber and Airbnb create huge opportunity for a few, while protesting taxi drivers on the streets of our cities give an image to a side-lined majority. 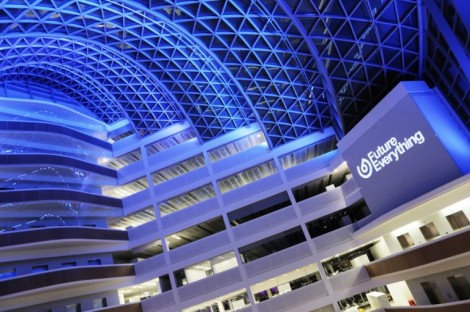 These disruptions were foretold: Richard Barbrook and Andy Cameron’s denunciation of “the Californian Ideology” was published the same year that FutureEverything celebrated its first festival. Their essay gave voice to a critical current in digital culture that has run through FutureEverything down the years. But only in the last eighteen months have the commonplace and simplistically positive narratives surrounding the digital age in wider technology culture at last run out of hot air.

That made this year an ideal opportunity for FutureEverything to hit pause on its headlong rush into the future, to reflect on the consequences of the past decades and the prospects for the decades to come. Today FutureEverything can question some of the most heartfelt values and narratives in digital culture. Should these be revised? Or abandoned? Or should we champion their foundational premises more than ever to counterbalance the corrosive forces inherent in the digital economy?

Is a bottom up localism the answer to economic inequality, centralisation, stacks, silos and moats? Are distributed architectures the answer to government surveillance and advertising intrusion? Are smart citizens the answer to smart cities? Is DIWO (Doing It With Others) the sharp edge of devolution or its undoing?

FutureEverything is an award-winning innovation lab for digital culture and annual festival, established in Manchester in 1995. For almost 20 years FutureEverything has been exploring the meeting point of technology, society and culture which lies at the heart of the digital debate. Through a community network and regular events it makes connections between thinkers, developers, coders, artists, designers, urbanists and policy makers, inspiring them to experiment and to collaborate in new ways.

The FutureEverything festival brings people together to discover, share and experience new ideas for the future. Pioneering the practice of city-wide ‘festival as laboratory’, it combines a large scale cultural event (encompassing art, music and discussion) with new technology, novel research methods and playful social experiments. It has been named by The Guardian as one of the top ten ideas festivals in the world.

Year round, FutureEverything champions the role of grassroots innovation in the digital creative economy. It creates opportunities for artists, programmers and coders though regular commissions, hackdays and innovation challenges. Through its research it identifies and explores areas in which technological, creative and societal innovation could facilitate change. Through policy work and thought leadership it advocates for the creative use of open data to improve government and empower citizens and communities.

As a world-leader in the digital art sector, FutureEverything commissions artists to illustrate new ideas through creative prototypes, interactive design and participative experiences. It is seen by Arts Council England as “one of the key touch-point organisations” connecting creative communities with academic research, the business sector and policy makers.