teamLab, founded in 2001, is a collaborative, interdisciplinary creative group that brings together professionals from various fields of practice in the digital society: artists, programmers, engineers, CG animators, mathematicians, architects, web and print graphic designers and editors. Referring to themselves as “ultra-technologists” their aim is to achieve a balance between art, science, technology and creativity. 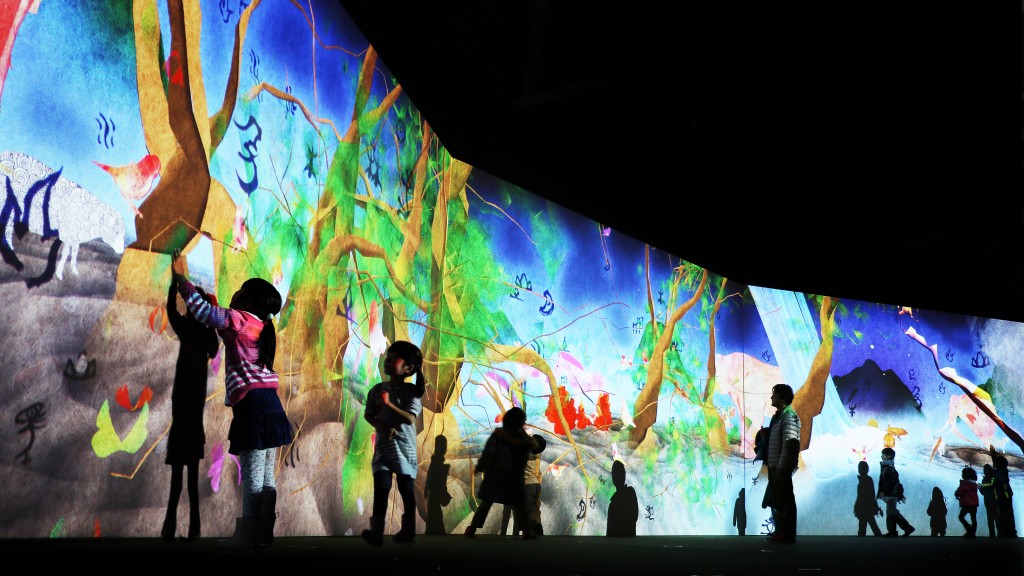 «No longer tied down to physical specificity – teamLab ultra-technologists go on – digital technology has made it possible to expand artworks, an example being the use of projection mapping to create extensive art installations. Digital technology has also allowed to develop space adaptability, which provides us with a greater degree of autonomy within the space where the artwork is to be installed. Artists are now able to manipulate and use much larger amounts of space, allowing viewers to experience artworks more directly».

Digital technology has allowed us to express change in itself

«The ability of digital technology to enable change allows us to express much more than we were able to express before the arrival of the digital age. For example, digital technology enables artworks to express change in itself much more freely and also much more precisely. Artworks themselves can now show how one person is able to instigate perpetual change and how the viewers, as well as the environment where the artwork is installed, can also affect change on the artwork. By creating an interactive relationship between the viewers and the artworks, viewers become an intrinsic part of the artworks themselves».

Through collaborative creation, we learn the experience of co-creation

«In the information society, everything is connected by networks and society is changing more and more rapidly.
Creativity is far more important than memorising historical dates or being good at doing calculations. Meanwhile current education is no more than extensive memorisation and practicing questions with one correct answer, where all other answers are wrong. An answer that had never existed until now may be the right answer.
In the current education system, from a young age and without exception, the focus is on homogeneous development of individual ability, so that each individual has no weak points. Homework is done individually, tests are taken individually and entrance examinations are individually evaluated. In other words, working solo is completely drilled into students.
Furthermore, many kids today are obsessed with their smartphones. Their brains might be connected with others through the smartphone, but physically they are engaged in completely individual activity.
But in society, it is increasingly required to be able to achieve creative results as part of a team. Collaborative and creative experience, in other words “co-creative” experience, that is what we believe children may need now more than anything else. Using the latest digital technology, we want children to enjoy moving their bodies about freely in a shared space, interacting with each other, collaboratively creating in a “co-creative” experience. And we want them to become the kind of people who can enjoy creative collaboration. From this wish was born, “Learn and Play! teamLab Future Park”, an experimental project focused on the different relationships amongst people with digital art». Interactive digital installation Story of the Time when Gods were Everywhere is part of such project.

In Story of the Time when Gods were Everywhere, when children touch the characters the world contained in those characters opens up and the story begins. The objects that are born from the characters influence each other and are influenced by children`s actions. Children using their bodies and changing the world together can create a story.