The HbbTV application includes videos related to the Berlin Wall, and will be available on RBB’s television channel from the 3rd October 2014.

At the IFA 2014 event, held in Berlin on 5th -10th September, partner RBB showcased the Berlin Wall Smart TV application developed for use in Europeana Space. The HbbTV application is a dossier of 250 archive videos ranging from events leading up to the building of the Berlin Wall in 1961 to German re-unification in 1990. 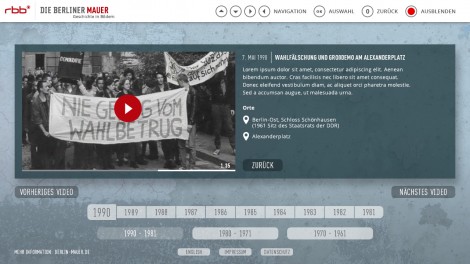 This application will be available to Smart TV viewers on RBB’s television channel from the 3rd October 2014. Via the red button, users can start the application on their TV and watch any of the videos and read the accompanying information. The application is available in both English and German.

In Europeana Space TV Pilot RBB will investigate ways to include Europeana content in this and similar applications and acceptance by end-users.

The initial reaction of visitors to the RBB’s IFA booth was very positive. In the next few weeks activities will concentrate on fine-tuning the app before it is publically available from the 3rd October.

Looking forward to showing the app in the Europeana Space Opening Conference in Venice (16-17 October 2014): http://veniceconference2014.europeana-space.eu ! 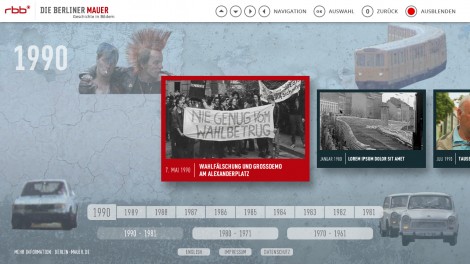