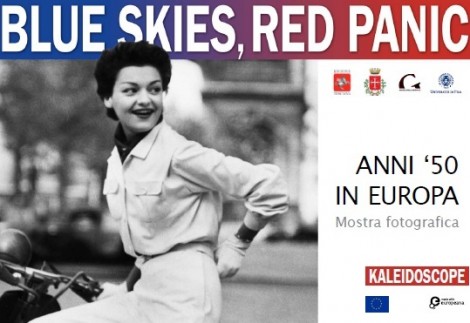 Photographic exhibition from the EU project “Fifties in Europe Kaleidoscope”.

Through the images from some of the most important European photographic archives, this exhibition showcases the era of the 1950s of a nascent Europe, balacing between east and west, freedom and repression, terror and euphoria. The Pisa display is the first of a series, as the exhibition is conceived to be travelling across Europe.

The exhibition in Pisa saw a collaboration with Museo Piaggio, Fondazione Pisa and Fondazione Palazzo Blu, enriching the BLUE SKIES, RED PANIC exhibition with an original Vespa from 1957 and a selection of images from the local exhibition Gli Anni ’50, Immagini di un decennio a Pisa which was displayed at Palazzo Blu in 2018.

BLUE SKIES, RED PANIC is created by the EU project Fifties in Europe Kaleidoscope, co-financed by the European Union in the CEF Connecting European Facility programme.

The 1950s in Europe were a decade of transition and (re-)construction, modernisation and change. This change was fundamental and reached all Europeans who longed for the normality of everyday life after decades of war with new designs, new consumer products, new media, music and fashion. Glamour, “sweet home” and prosperity: these are well-known stereotypes that characterize the myth of an iconic age.

But this is just one side of the coin. This era was shaped by contradictions: many in Europe still suffered from the consequences of the Second World War such as hunger, poverty, lack of housing and displacement. The formation of interstate relations, which on the one hand led to rapprochement and cooperation between formerly hostile nations, but on the other hand was determined by hegemonic foreign policy and domestic repression, strengthened the already existing division of Europe into East and West and intensified Cold War tensions to the brink of a nuclear conflict.

The narratives that emerge from the black-and-white images are far from rendering simplified pictures of the past. Quite the contrary, many different facets and nuances, differences and similarities become visible. With a kaleidoscope of visual impressions, the exhibition aims to evoke memories that are familiar to us or invite us to a completely new discovery. Looking back on the iconic era of the 1950s in Europe, the exhibition offers a photographic retrospective, without falling into mere nostalgia, and promotes a critical understanding of the creation of the European Union in which we live today.